Donald Trump is a very unusual candidate who’s likely to break some of our usual presidential voting patterns. Right? Sure, he’ll get the angry white males that always vote Republican, but other groups might shy away from 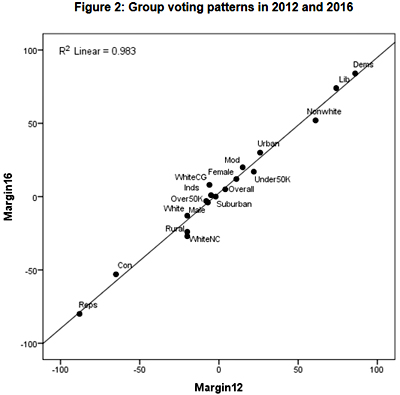 Trump and vote for the Democratic ticket in larger numbers than usual.

Not so fast, says Alan Abramowitz. If you compare current polls to the 2012 exit polls, it turns out that most demographic groups are split almost precisely the same:

Trump’s highly unusual background, personality, and unorthodox views on certain issues have led to considerable speculation that his nomination could upset normal voting patterns by producing high defection rates among some groups of Democratic and Republican identifiers and putting new states in play in November….[These claims] are probably mistaken. These data show that the American electorate remains deeply divided along party lines. Democrats and Republicans, including independents who leaned toward each party, differed sharply on economic, cultural, and racial issues. Moreover, Democrats and Republicans, including Sanders Democrats and non-Trump Republicans, held strongly negative feelings about the opposing party’s likely nominee.

I guess we’ll see. I’d like to say that it depends on just what kind of moronic stuff Trump does over the next few months, but that really doesn’t seem to matter much. Anyone still willing to vote for Trump after his antics so far this year is probably going to vote for him no matter what.