Oklahoma has been resisting expansion of Medicaid for years, but they might finally be ready to cave in:

A bust in the oil patch has decimated state revenues, compounded by years of income tax cuts and growing corporate subsidies intended to make the state more business-friendly. Oklahoma’s Medicaid agency has warned doctors and other 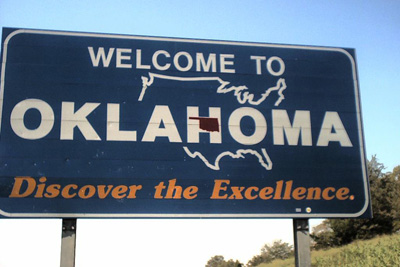 health care providers of cuts of up to 25 percent in what the state pays under Medicaid.

….In the poverty-wracked south­eastern corner of the state, where 96 percent of babies in the McCurtain Memorial Hospital are born to Medicaid patients, most health care would end, said hospital CEO Jahni Tapley. “A 25 percent cut to Medicaid would not put my hospital in jeopardy, because we are already in jeopardy,” Tapley said. “A 25 percent cut would shutter our doors for good, leaving 33,000 people without access to health care.”

….Under the proposal, which would be funded in part with a $1.50-per-pack tax on cigarettes, Oklahoma would shift 175,000 people from its Medicaid rolls onto the federal health exchange created by the Affordable Care Act.

Oklahoma’s governor is calling this “Medicaid rebalancing,” but her constituents are too sharp for her. They know what’s going on: “They can call it Medicaid rebalancing, but there’s only one federal program that offers a 9-to-1 federal match, and that’s Obamacare,” said Johnathan Small, president of the Oklahoma Council on Public Affairs. There’s just no fooling some people.

Anyway, it’s good to see that they’re not planning to fund this with, say, an increase in the income tax or the oil tax or the corporate tax. That might actually hit rich people, and God knows that would be the wrong way to pay for indigent services.