It’s a funny thing: the usual take on Bernie Sanders supporters is that they’re a bunch of idealistic college kids who want a revolution. But whenever I write a post critical of Bernie, I sure don’t seem to get much criticism from the smart set. Here’s a random baker’s dozen tweets responding to my post from last night: 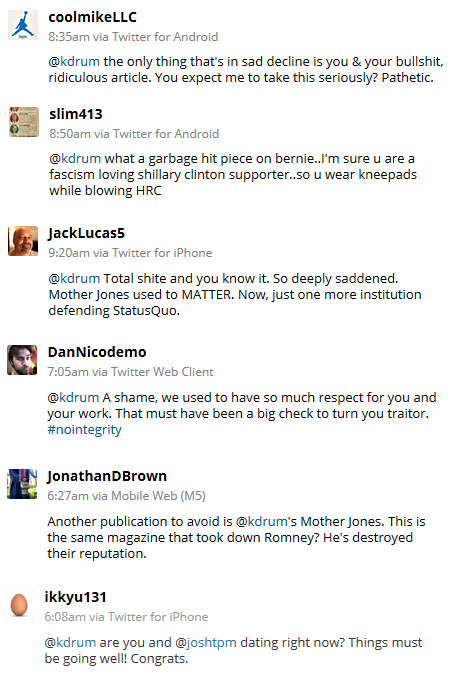 I know you can’t draw any conclusions from the cesspool of social media. And I’m not a woman, so I escape the worst of this stuff. Still, this is the kind of barely literate nitwittery that I get from the tea party types when I write about Benghazi or the IRS. Full of passion, for sure, but not a whole lot of idealism. Just rage and lame middle-school insults.

Would I get the same quality of stuff from Hillary supporters if I wrote something negative about her? In the past I haven’t, but my criticisms of Hillary have been more targeted. Plus she’s winning, and that makes it a lot easier to let criticism wash off your back.

I dunno. I suppose the lesson is not to draw any lessons from Twitter (though my inbox looked pretty similar this morning). But I’ll draw a lesson anyway: We’re no angrier than we’ve ever been, but social media sure does make it a lot easier to express our rage publicly. In the past all we could do was yell at the TV in the privacy of our own living rooms. All things considered, this probably isn’t such a positive change.