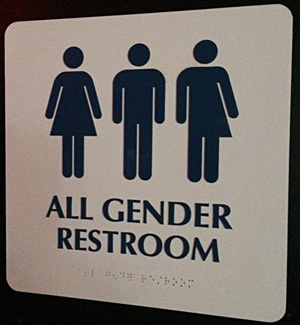 Jim Geraghty asks a question that’s been on my mind too:

How happy do you think Hillary Clinton is with the Obama administration’s decision that schools must permit transgender students to use the bathroom they prefer?

Here’s an issue that will irk a lot of parents of daughters who might otherwise not care that much about politics. It’s not an automatic political winner for Obama and his allies; a Reuters poll found 43 percent saying that people should use public restrooms “according to the biological sex on their birth certificate” compared to 41 percent who opt for “according to the gender with which they identify.” Sure, Donald Trump said he opposed the North Carolina law, but if this rule makes you feel like Washington is arrogant, meddling, out-of-touch, and forcing changes upon your community that you don’t want, who do you think you’re going to vote for?

It’s almost inevitable that liberals will annoy a lot of people over cultural issues like this. It goes with the territory. But I suspect Geraghty is right: Hillary Clinton would probably have preferred that this just stay on the back burner for a while.

It’s true that she caught a break when Donald Trump said he didn’t think this was a big problem and states like North Carolina should just settle down. But let me tell you something about Trump: he could change his mind. Really! I’ve seen him do it. It wouldn’t even be hard. All he has to do is say that he favored leaving things alone, but if the Obama administration is going to start sending out decrees to schools about it, well, that’s going too far. We need to fight back against this kind of government overreach in the service of PC nonsense.

We’ll see. But as a voter turnout tool for conservatives, this could be the new gay marriage. I wonder if it will be for liberals too?