As I mentioned the other day, conservatives are outraged over a report that Facebook manipulates its “trending topics” feed to favor liberal issues. So far, this allegation comes from one (1) ex-Facebook guy, so I’m inclined to wait a bit 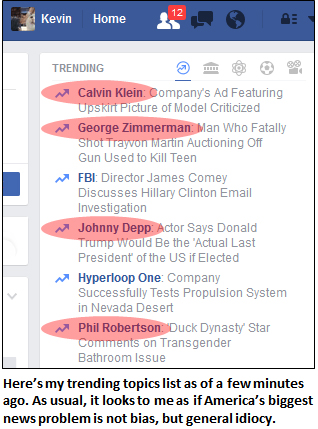 and see if it turns out to represent anything real or not. We have some history here, after all, and conservatives manage to routinely feel victimized by things that, in the end, turn out to be nothingburgers. So we’ll see.

In the meantime, Megan McArdle suggests this might pose a problem for liberals:

Facebook has indeed acquired a great deal of power. It dominates the news diet of millennials, and is becoming more and more important for the rest of us….Liberals who are fond of press freedom and vigorous antitrust enforcement are going to be forced into making one of two arguments, neither of them perfectly satisfying. The first is that while heavy-handed government smiting of monopoly (or quasi-monopoly) powers is necessary and justified, the media is a special exception where the government should allow powerful corporations to do whatever they want.

….The greater danger is that liberals will end up falling back on an argument that is gaining more and more currency on the left: that this biasing of information is not merely an unfortunately insoluble problem, or so minor that it doesn’t make much difference in our politics, but that it is actually an affirmative good.

I don’t think there’s any problem here. For starters, the media is a special exception thanks to the First Amendment. This might favor liberals in the case of Facebook and conservatives in the case of AM talk radio, but it’s an exception regardless.

More to the point, the limits on government interference apply only to content-based rules. The Justice Department routinely halts media mergers, for example, if they’d end up concentrating too much power in a single corporation. They did this just recently when they prevented the company that owns the LA Times from buying the company that owns the Orange County Register. That may or may not have been wise, but it posed no First Amendment issues.

Likewise, no liberal would suggest that the right way to rein in Facebook is to regulate its news feed. If there really is a news monopoly here, it would be addressed by breaking up Facebook; or preventing acquisitions that might increase their news monopoly; or (possibly) by asking Facebook to create a public interface that allows third parties to create their own news feeds. Or by doing nothing at all because there’s nothing to be done. Plenty of metro areas have only one newspaper these days, for example, and that’s just the way it is. Nobody thinks the feds can do anything about it no matter how biased any particular newspaper’s coverage might be.

My guess is that (a) the whole Facebook news feed issue is probably overblown, and (b) even if it’s not, it poses no special problems that we haven’t seen before. Lots of news organizations are biased, and the government rightfully takes no action against them. I don’t think liberals have a problem with that.