I’ve coincidentally run into a couple of things this week that have sparked a question. The first is from Atrios, who describes in caustic terms how the well-off political class views the world:

I think they see the world as a combination of the way their peers see it (and they’re mostly rich!), some 30 year old vision of Middle Class America, and The Poors. They don’t get that middle class America are increasingly becoming like the poors. Maybe a bit more money, maybe a bit better lifestyle, but living paycheck to paycheck with student debt and one financial (medical, etc..) event away from nothing.

So is this true? Is the American middle class getting worse off with time? By coincidence, a new paper by John Komlos tries to answer this question. First, he takes a look at income, and comes to the usual conclusion: the richer you are, the more your income has grown over the past few decades (with an odd exception for the very poorest, who have done better than the middle class). But then he goes further: “Income growth is of interest primarily to the extent it is welfare enhancing,” he says, and then produces some estimates of welfare growth since 1979. This involves a bunch of Greek letters, including 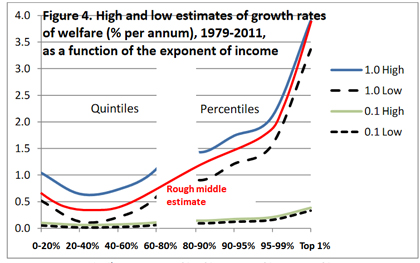 one that can’t be estimated at all, but let’s ignore all that and just assume that Komlos did his sums properly. His basic result is on the right (I’ve edited and annotated it to make his estimates a little clearer).

Unsurprisingly, overall welfare doesn’t differ much from income: the richer you are, the faster your welfare has increased. Overall, the rich have done spectacularly well, while the middle-class has endured decades of sluggish growth.

I can’t stress enough that this is grim news. That number should be way higher. Still, if you want to make the argument that middle-class families today are in deeper absolute financial stress than they used to be (“increasingly becoming like the poors”) you need to provide some evidence. I can’t find it. I’ve looked all over, and everything I can find suggests that middle-class families are about as financially secure as they’ve always been—both in current income and future retirement income. That is, some are doing OK, some are living paycheck-to-paycheck, and some are in deep trouble. Just like always.