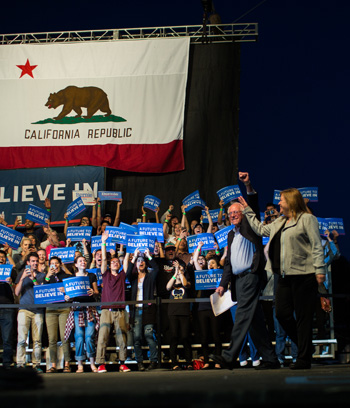 The LA Times reports that Bernie Sanders is doing something unusual: campaigning everywhere in California. Why?

All week Bernie Sanders has galloped about California, showing up in places where presidential candidates usually don’t tread. On Sunday he was in Vista. On Tuesday he hit Riverside and San Bernardino. On Wednesday he was in Cathedral City and Lancaster. On Thursday, Ventura. On Saturday, he’ll be in Santa Maria.

….His move to the exurbs and to other less definitely Democratic turf is driven by several realities particular to California. Foremost is the state of the Democratic campaign: Sanders continues to trail Clinton, even if the race appears to be narrowing. So he needs every vote he can get….Another factor makes the exurbs a potential goldmine for Sanders, in particular: While the state as a whole took a giant hit during the Great Recession, the exurbs were particularly hard hit.

There’s actually a simpler explanation for this: 2016 is the first time in half a century that anyone has bothered campaigning at all in a California presidential primary in June—let alone for an entire month. In the past, nomination fights have been over by March or April, and California’s only real role has been to act as a base for fundraising. And there’s not much point in holding a fundraiser in Lancaster.

So that explains all the exurbs. Sure, they might be Bernie territory, but he still wouldn’t be there in an ordinary year. He’d either be out of the race entirely or else he’d already be the winner, and he’d be holding $5,000-a-plate dinners in Brentwood and Atherton.