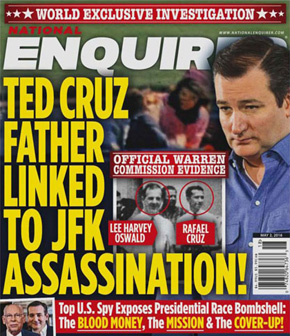 A few days ago I was checking out at the supermarket and saw the cover of the National Enquirer telling me that Ted Cruz’s father was linked in some way with the assassination of JFK. I briefly wondered whether this would help or hurt Cruz with the tea party crowd and then forgot about it. But Donald Trump is on it:

“His father was with Lee Harvey Oswald prior to Oswald’s being — you know, shot. I mean, the whole thing is ridiculous,” Trump said Tuesday during a phone interview with Fox News. “What is this, right prior to his being shot, and nobody even brings it up. They don’t even talk about that. That was reported, and nobody talks about it.”

Very presidential, no? But it reminds me of a New York Times piece this weekend headlined “Experts Warn of Backlash in Donald Trump’s China Trade Policies.” Gee, no kidding. I’m glad the Times was on this.

And yet, what are reporters supposed to do? Trump tosses out absurdities on a daily basis, and we can either ignore them or we can give them more oxygen by writing earnest explanations of why he’s wrong. It’s a lose-lose proposition. Tomorrow he’ll declare that teaching arithmetic in grade school is a waste of time since we all have calculators on our cell phones. Mobs of Trump supporters will start carrying around signs saying “No More Times Tables!!!” and a week later, when no one cares anymore, we’ll get a barrage of op-eds laying out in gruesome detail all the academic research explaining why kids should still learn arithmetic these days. I imagine this is going to happen approximately weekly from now until the first week of November.