From Mother Jones this morning:

It’s the moment we’ve all been dreading. Initial findings from a massive federal study, released on Thursday, suggest that radio-frequency (RF) radiation, the type emitted by cellphones, can cause cancer.

I guess it’s up to me to present the authorized opposing viewpoint. I’m going to outsource it to Aaron Carroll, who’s pretty annoyed:

….Now let’s get to brain cancer….no significant differences in the incidences of lesions in exposed male rats compared to controls….No differences were seen in the female rats at all. The cardiac schwannomas were more compelling, but again, 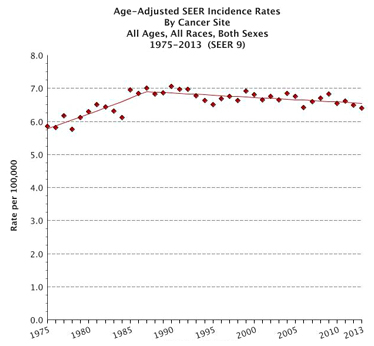 only for males. No differences for females.

….I didn’t see any sample size calculation….power calculation….about 14%. This means that false positives are very likely. The cancer difference was only seen in females, not males. The incidence of brain cancer in the exposed groups was well within the historical range. There’s no clear dose response….Also, this: Cell phones are UBIQUITOUS in the United States. If they were causing cancer, we would expect to see rates of cancer going up, right? That’s not what we’re seeing. They’ve been decreasing since the late 1980’s.

I’d add one more thing. This is going to sound snarky, but honest, it’s not. Here it is: people don’t use their cell phones much to make phone calls. This is especially true of young people, which means it’s a trend that will only get more pronounced with time. But there’s really no way that a cell phone used for, say, texting or Snapchatting could cause brain cancer. Maybe skin cancer? Fingertip cancer?

On the other hand, maybe it’s not the cell phones at all. Maybe it’s the cell towers. Has everyone here read Waldo? Maybe you should.