I guess I stopped paying attention or something, but I didn’t realize there was ever any real debate about the core of Bernie Sanders’ support. However, Jeff Stein reports that recently lots of people have decided he’s being powered by votes from the white working class:

This trope has become the conventional wisdom in the media, with the Wall Street Journal, the Nation, The Huffington Post, and a host of other outlets (including me at Vox) 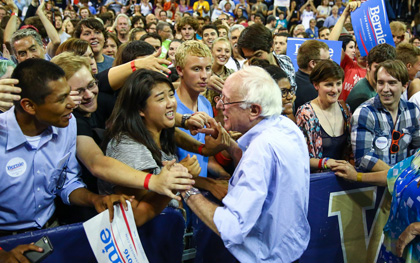 stating as fact that downscale whites have formed a crucial piece of Sanders’s base.

Stein digs a little deeper and comes up with this:

If Sanders’s “white working-class” voters aren’t just college students, you’d also expect him to be doing better among downscale middle-aged white voters than rich ones. But this turned out not to be true: Low-income white people in their 40s, 50s, 60s, and 70s did not break for Sanders.

….”My main concern is that the image of Bernie-supporting older poor people who’ve lost their factory jobs to trade is not supported,” Grossmann says. “I’m least supportive of the idea that there’s a population of white, older workers who lost their jobs and are now supporting Sanders. There’s very little evidence of that.”

Similarly, Abramowitz ran a multivariate analysis to help figure out this question. Abramowitz looked at a large survey data set and asked: What forms of identity actually predict support for Bernie Sanders or Hillary Clinton? “It was age, and beyond that nothing mattered. Maybe ideology mattered a little bit,” he said. Income was not a factor.

Having missed this peculiar turn of the conventional wisdom, I can now continue believing what the data has always suggested: Bernie’s main core of support is young voters, especially young white voters. Income doesn’t matter all that much, and neither does education. Young people of all stripes like him, and young people of all stripes really don’t like Hillary. Among white voters, the Democratic primary is basically a generational war, and that’s it.