I kinda sorta listened to Donald Trump’s foreign policy speech this morning. You know, the one we were all looking forward to because it was written by an actual speechwriter and would be delivered via teleprompter. That’s Trump being presidential, I guess.

So how did Trump do? That depends on your expectations. For a guy who never uses a teleprompter, not bad. By normal standards, though, he sounded 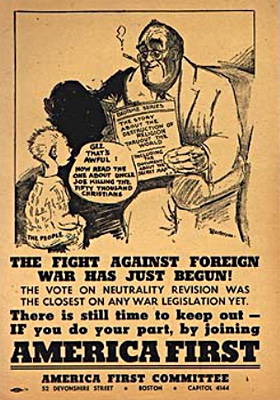 about like a sixth grader reciting a speech from note cards. On content, it was the same deal. Compared with normal Trump, it wasn’t bad. By any real-world standard, it was ridiculous.

Fact-checking his speech is sort of pointless, basically a category error. Trump is a zeitgeisty kind of guy, and that’s the only real way to evaluate anything he says. In this case, the zeitgeist was “America First”—and everyone’s first question was, does he know? Does he know that this is a phrase made famous by isolationists prior to World War II? My own guess is that he didn’t know this the first time he used it, but he does now. Certainly his speechwriter does. But he doesn’t care. It fits his favorite themes well, and the only people who care about its history are a bunch of overeducated pedants. His base doesn’t know where it came from and couldn’t care less.

So: America First. And that’s about it. Trump will do only things that are in America’s interest. He will destroy ISIS, crush Iran, wipe out the trade deficit with China, eradicate North Korea’s bomb program, and give Russia five minutes to cut a deal with us or face the consequences. Aside from that, Trump’s main theme seemed to be contradicting himself at every turn. We will crush our enemies and protect our friends—but only if our friends display suitable gratitude for everything we do for them. We will rebuild our military and our enemies will fear us—but “war and aggression will not be my first instinct.” We will be unpredictable—but also consistent so everyone knows they can trust us. He won’t tell ISIS how or when he’s going to wipe them out—but it will be very soon and with overwhelming force. He will support our friends—but he doesn’t really think much of international agreements like NATO.

Then there was the big mystery: his out-of-the-blue enthusiasm for 3-D printing, artificial intelligence, and cyberwar. Where did that come from? In any case, the Pentagon is obviously already working on all three of these things, so it’s not clear just what Trump has in mind. (Actually, it is clear: nothing. Somebody put these buzzwords in his speech and he read them. He doesn’t have the slightest idea what any of them mean.)

So what would Trump do about actual conflicts that are actually happening right now? Would he send troops to Ukraine? To Syria? To Libya? To Yemen? To Iraq? Naturally, he didn’t say. Gotta be unpredictable, after all.

But whatever else you take away, America will be strong under Donald Trump. We will be respected and feared. Our military will be ginormous. No one will laugh at us anymore. We will proudly defend the values of Western civilization. This all serves pretty much the same purpose in foreign policy that political correctness, Mexican walls, and Muslim bans serve in Trump’s domestic policy.

And there you have it. Did he really need a teleprompter for that?