A couple of days ago I wrote a post criticizing Bernie Sanders for basing his campaign on a promised revolution that never had the slightest chance of happening. A lot of people didn’t like it, which is hardly a surprise. What is a surprise is how polarizing the response was. My Twitter feed was split almost perfectly in half, and nearly every response fell into one of two categories:

There was almost literally nothing in between. Either fulsome praise or utter contempt. I need to think some more before I figure out what to make of this: It’s dangerous to assume Twitter reflects the larger progressive community, but it might be equally dangerous to write it off as meaningless. It certainly seems to suggest an even stronger chasm in the Democratic Party than I might have suspected, and possibly more trouble down the road if it also reflects a stronger loathing of Hillary among white millennials than I’ve previously suspected. But I’m not sure.

In any case, although I can’t do much about people who just didn’t like my tone (bitter, condescending, clueless, etc.) I figure it might be worth addressing some of the most common substantive complaints. Here are the top half dozen:

1. I’m a typical Clintonian defender of the status quo.

No. My post was very explicitly about how to make progress, not whether we should make progress. I don’t support everything Bernie supports, but I support most of it: universal health care, reining in Wall Street, fighting climate change, reversing the growth of income inequality, and so forth. If we could accomplish all this in a couple of years, I’d be delighted. But we can’t.

2. I think change is impossible.

In which @KDrum argues the system cannot be changed thus anyone who tries creates cynicism: https://t.co/mqhOzxij0n #NoSenseOfIrony

No. Of course the system can be changed. Why would I bother spending 14 years of my life blogging if I didn’t believe that? But promising a revolution that’s simply not feasible really does have the potential to create cynicism when a couple of years go by and it hasn’t happened.

3. Yes we can have a revolution! You just have to want it bad enough.

@paulkrugman @kdrum Excuse me, but FDR & L. Johnson did revolutionary things! Most of us r sick of settling!

FDR and LBJ had massive public discontent and huge Democratic majorities in Congress. The former was the result of an economic disaster and the latter took a decade to build up in an era when Democrats already controlled Congress. We’re not going to get either of those things quickly in an era with an adequate economy and a polarized electorate.

4. Sure, you boomers have it easy. What about young people?

@kdrum @NewsConnoisseur None of the good things you tout about the economy are true for young people. $70k student loans, not incomes/jobs

This just isn’t true. The average college grad today earns about $43,000, roughly the same as 25 years ago. The unemployment rate for recent college grads is under 5 percent. About 70 percent of college grads have debt under $30,000, and the default rate on college debt is about the same as it was 30 years ago. I want to be crystal clear here: this isn’t good news. Incomes should be rising and debt should be much lower. Nonetheless, the plain fact is that recent college grads aren’t in massive pain. They suffered during the Great Recession like everyone else, but all told, they probably suffered a little less than most other groups.

(For comparison purposes: My first job out of college in 1981 paid me about $35,000 in current dollars. That’s a little less than a current grad earning $43,000 and forking over $300 per month in loan repayments. I was hardly living high on that amount, but I can’t say that I felt especially oppressed either.)

5. You have no idea what life is like outside the Irvine bubble.

.@KDrum really said: “You have to buy off interest groups, compromise your ideals, and settle for half loaves”

I got a lot of tweets suggesting that I was, um, misguided because I’m personally well off and live in an upper-middle-class neighborhood. It’s certainly true that it’s easier to be patient about change when you’re not personally suffering, but in this case it’s the Bernie supporters who are living in a bubble. They 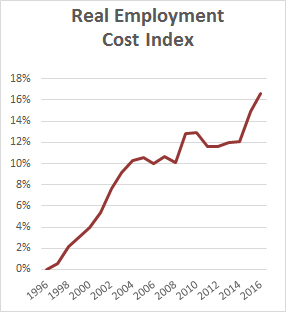 assume that the entire country is as ready for torches and pitchforks as they are, but the numbers flatly don’t back that up. The median family income in America is $67,000. Unemployment is at 5 percent, and broader measures like U6 are in pretty good shape too. Middle-class earnings have been pretty stagnant, but total compensation hasn’t declined over the past two decades. Obamacare has helped millions of people. So has the ADA, SCHIP, the steady rise in social welfare spending, the 2009 stimulus, and the 2006 Pension Protection Act.

Again, let’s be crystal clear: This isn’t an argument that everything is hunky dory. I’ve written hundreds of blog posts pointing out exactly why our current economic system sucks. But it is an argument that the economy is simply nowhere near bad enough to serve as the base of any kind of serious political revolution.

This is one of the most stupidest article by @kdrum i have ever read in my life. Solidifying my #BernieOrBust https://t.co/hYpV08YLKQ

I guess I can’t really argue with that. I also can’t argue with anyone who just didn’t like my tone. In my defense, I’ve found that no matter how hard I try to adopt an even tone, Bernie supporters are quick to insist that I’m just an establishment shill. For what it’s worth, the same is true of Hillary supporters when I write a post critical of her—even when my criticism is of something patently obvious, like her appetite for overseas military intervention.

Two more things. First, Greg Sargent makes a perfectly reasonable criticism of my position. My fear is that having been promised a revolution, Bernie supporters will become disgusted and cynical when Hillary Clinton and the establishment win yet again and the revolution doesn’t happen. Sargent argues not only that it’s useful to have someone like Bernie delivering a “jolt” to the political system, but that he might have permanently invigorated a new cohort of voters. “Many of these Sanders voters, rather than dissipate once they come crashing down from their idealistic high, might find ways to translate those newly acquired high ideals into constructive influence.”

Yep. There’s no way of telling what will happen. If Bernie himself is bitter from his defeat, I think I’m more likely to turn out to be right. But if Bernie decides to take what he’s built and turn it into a real movement, Sargent is more likely to be right. We’ll see.

Finally, for the record, here’s where I agree and disagree with Bernie’s main campaign points. None of this will be new to regular readers, but others might be interested:

Income inequality: Total agreement. I’ve written endlessly about this. Rising inequality is a cultural and economic cancer on a lot of different levels.

Universal health care: Total agreement. I think it will take a while to get there from where we are now, but if I could snap my fingers and import France’s health care system today, I’d do it.

Breaking up big banks: I agree with the sentiment here, but I don’t think it’s the best way of reining in the finance system. I prefer focusing on leverage: increasing capital requirements significantly; increasing crude leverage requirements; and increasing both of these things more for bigger banks. This makes banks safer in the first place; it gives them an incentive not to grow too large; and it reduces the damage if they fail anyway. (This, by the way, has been our main response to the financial crisis via Basel III and Fed rulemaking. It’s been a good step, but it would be better if it had been about twice as big.)

Free college: I’m ambivalent about this. These days, college benefits the upper middle class much more than the working class. On the other hand, the nation benefits as a whole from making college as accessible as possible. Beyond that, this is mostly a state issue, not one that can be easily solved at a national level. Generally speaking, I’d like to see college debt levels drop by a lot, but I’m not quite sure what the best way to do that is.

Raising taxes on the rich: I’m generally in favor of this, though not necessarily in exactly the way Bernie proposes. More broadly, though, I think liberals should accept that if we want big programs that significantly reduce inequality—and we should—it’s going to require higher taxes on everyone. The rich can certainly do more, especially given their stupendous income increases since the Reagan era, but they can’t do it all.

Military intervention: Bernie hasn’t really been very specific on this, but he’s generally skeptical of overseas wars. I agree with him entirely about this. It’s my biggest concern with a Hillary Clinton presidency.

I’ve probably left some important stuff out, but those are the big ticket items. Take them for what they’re worth.

UPDATE: Here’s a Daily Kos poll about my take on Sanders. In fairness, it follows a sympathetic summary from Xaxnar, and it’s obviously nothing scientific, but still interesting.