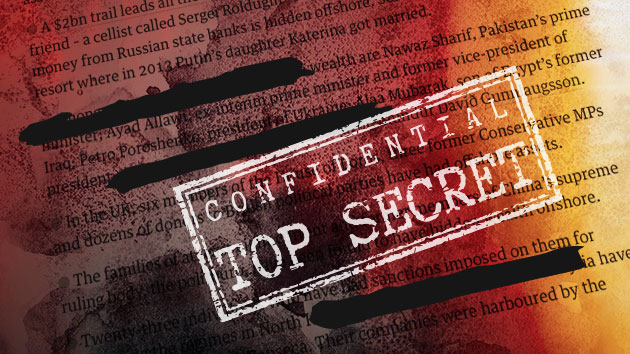 This is from a memo by one of the partners of Mossack Fonseca, a Panama-based outfit that specializes in setting up offshore accounts and shell corporations:

Ninety-five per cent of our work coincidentally consists in selling vehicles to avoid taxes.

I suppose that’s not much of a shocker, is it? Still, it’s nice to hear it from the horse’s mouth, along with all the usual defensive whinging about how it’s not inherently illegal to set up offshore accounts and many people have totally legitimate reasons for doing so.

This admission comes from the “Panama Papers,” a massive leak of documents from Mossack Fonseca. According to the Guardian, “the records were obtained from an anonymous source by the German newspaper Süddeutsche Zeitung, which shared 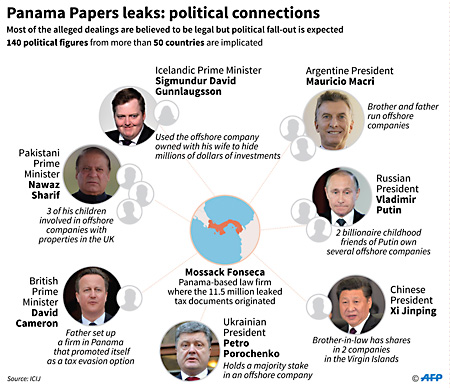 them with the International Consortium of Investigative Journalists (ICIJ). The ICIJ then shared them with a large network of international partners, including the Guardian and the BBC.”

So what have we found out so far? Well, it turns out that Vladimir Putin and his friends seem to have socked away about $2 billion in offshore accounts. You’re shocked, aren’t you? Also the president of Ukraine. And relatives of the leaders of China, Pakistan, and Argentina. And the prime minister of Iceland.

Iceland? That’s…unexpected. For the most part, what this leak has told us is that corrupt leaders of corrupt countries are quite likely involved in corruption. But Iceland isn’t anybody’s first choice for a corrupt state. Still, it’s worth remembering that Iceland was ground zero for the European banking crisis, so they have quite a spectacular recent history of dodgy financial practices. Plus it turns out the Icelandic prime minister has a really rich wife.

And McClatchy, the only US news organization with access to the papers, points even more fingers:

Those exposed in the leak include the prime ministers of Iceland and Pakistan, an alleged bagman for Syrian President Bashar Assad, a close pal of Mexican President Enrique Peña Nieto and companies linked to the family of Chinese President Xi Jinping. Add to those the monarchs of Saudi Arabia and Morocco, enough Middle Eastern royalty to fill a palace, honchos in the troubled body known as FIFA that controls international soccer and 29 billionaires featured in Forbes Magazine’s list of the world’s 500 richest people.

Everyone is now making vague noises about offshore tax havens and how they should be shut down, or regulated, or something. But the plain truth is that no one really wants to do it. Britain, obviously, could shut down the ones under their control pretty easily, but they never have. The United States could effectively shut them all down by refusing to allow offshore shell companies in designated tax havens access to US banks. But we haven’t done that either. Too many rich people like things just the way they are.

In any case, you might find this whole thing a bit boring because it implicates only a bunch of foreigners, mainly in countries already well known for their casual relationship with bribery and corruption. What about the United States? Well, there’s this, from the book Global Shell Games:

Maybe Mossack Fonseca just isn’t the favored servicer of American corporations and zillionaires. But surely they have some American customers? Yes indeed:

Editor of Süddeutsche Zeitung responded to the lack of U.S. individuals in the documents, saying “Just wait for what is coming next”

So stay tuned. Maybe Hillary Clinton has millions of dollars stashed away in the Isle of Man!