I’ve been a little chart heavy this morning, and now I’ve got one more. This comes from a paper written a few months ago by Jesse Shapiro of Brown University, and it presents a model of how journalism can fail when special interests are involved. The model itself is pretty simple: if journalists present both sides of an argument at face value, then special interests are highly motivated to invent plausible-sounding evidence for their side of the argument—regardless of whether it’s anywhere close to true. As long as they get quoted, the public will be suitably confused even if the journalists themselves know that it’s mostly hogwash.

No surprise there. But this works only if journalists abide by a convention which demands that both sides are treated as equally credible. What happens if that’s not true? The chart below tells an interesting story on climate change: 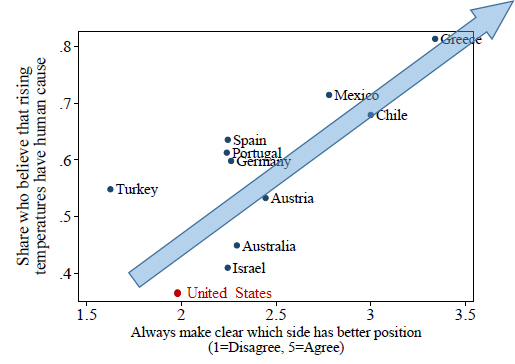 In the United States, journalists tend to simply present both sides of an argument without taking sides. In other countries, where that norm is less strict, reporters often tell their readers which side has the better argument. When that happens, the public is more likely to believe in climate change.

Now, there are obviously pitfalls to reporters deciding which side has the better argument. You can end up being better informed by this, or you can end up like Fox News. Still, it’s an interesting comment on the American style of journalism.