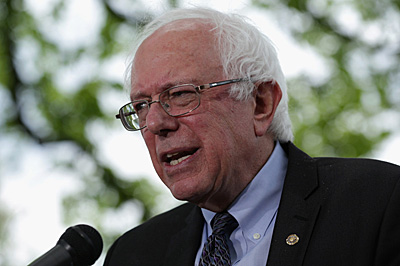 This argument was tiresome a decade ago, and it’s still tiresome:

Bernie Sanders released his 2014 tax return this weekend, revealing that he and his wife took $60,208 in deductions from their taxable income. These deductions are all perfectly legal and permitted under the U.S. tax code, but they present a morally inconvenient, if delicious, irony: The Democratic socialist from Vermont, a man who rages against high earners paying a lower effective tax rate than blue-collar workers, saved himself thousands using many of the tricks that would be banned under his own tax plan.

….The deductions left Sanders and his wife paying…an effective federal tax rate of 13.5 percent. If that seems low to you, your instincts are right: According to the Tax Foundation, the average federal income-tax rate for a couple making $200,000 to $500,000 in 2014 was 15.2 percent.

….What Sanders did, using every option and advantage available under a Byzantine tax code to minimize his tax payment, is a normal practice for many Americans. But it’s also exactly what the targets of his anger do. You can argue about whether or not that’s greed, but it’s impossible to argue that it isn’t hypocrisy. The paragon of liberal purity is not as pure as he’d like the world to believe.

This isn’t even close to hypocrisy. If you don’t like the designated hitter rule in baseball, does that mean you should send your pitcher to the plate just to prove how sincere you are? Of course not. You play by the rules, whatever those rules are.

I favor universal, government-funded health care. Does that mean I should virtuously refuse MoJo’s employer health care? Does anyone on the planet think that makes any sense at all?

Tax laws are tax laws, and there’s nothing hypocritical about following them even if you disagree with them. Just the opposite, in fact. It speaks well of Sanders that he supports changes that would hurt him personally. It’s a helluva lot more than Republicans ever do.