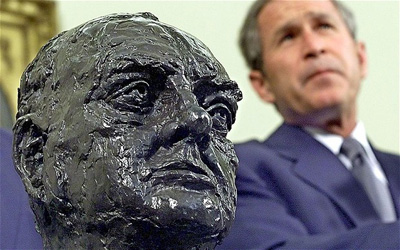 Over the years, conservatives have invented a spectacular set of grievances against President Obama—teleprompters, whitey tapes, Bill Ayers, birth certificates, etc.—but in the category of just plain strange, none of them surpass the tale of the missing Churchill bust. Early in his presidency, someone noticed that a bust of Churchill that had adorned the Oval Office during W’s presidency was gone, and this became a cause célèbre, one that continues to this day. Why does Obama hate Churchill? Is it because of his Kenyan background? Because he hates anyone who showed toughness during a time of war? Because he wanted to snub the British?

The correct answer is, “Who cares?” Still, it’s true that the White House offered up something of a whirligig of responses when this first hit the fan, and that’s a little odd too. Why were they so sensitive about it?

That’s still a mystery. However, a few days ago Boris Johnson—basically the Donald Trump of London—brought up the Churchill bust yet again, and this time Obama decided to explain personally what happened:

It was, Mr. Obama said, his decision to return that Churchill to his native land, because he wanted to replace it with a bust of the Rev. Dr. Martin Luther King Jr.

“There are only so many tables where you can put busts. Otherwise, it starts looking a little cluttered,” the president explained. “And I thought it was appropriate, and I suspect most people here in the United Kingdom might agree, that as the first African-American president, it might be appropriate to have a bust of Dr. Martin Luther King in my office.”

He added that the choice of Dr. King was “to remind me of all the hard work of a lot of people who would somehow allow me to have the privilege of holding this office.”

Bizarrely enough, then, it appears that conservatives were basically right (Obama actively chose to return the bust) and the White House pretty much lied about the whole thing. So score one for the conspiracy theorists.

What a weird affair. Why was the White House so hypersensitive about this? Did Obama really feel that he couldn’t afford to be seen favoring King over Churchill? I didn’t care much about this idiocy before, but now I kind of do. What was behind all the doubletalk?