Democracy Corps has an interesting new survey out. Basically, it shows that women hate Donald Trump; unmarried women really hate Donald Trump; and the white working class doesn’t actually seem to like him any better than they liked Romney. 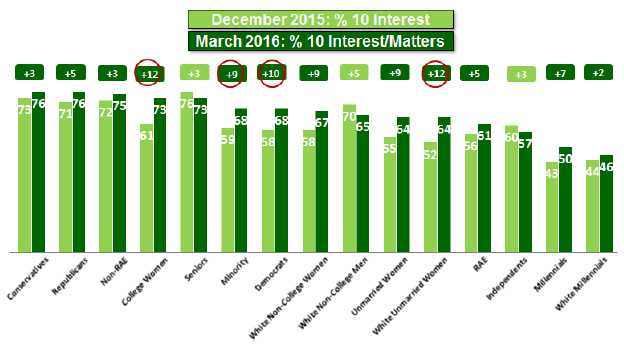 What this shows is that, generally speaking, traditional Democratic constituencies have been more fired up by this year’s election theatrics than traditional Republican groups. That’s bad news for Trump.

But there’s one exception: millennials. They’re the least engaged of all groups, and the election hasn’t done much to change that. Their enthusiasm is up a few points from December, but that’s all. Millennials in college are a lot more engaged—the women, anyway—but millennials in general aren’t showing much more enthusiasm than usual even though they’re starting from a low base.

This gets to one of my pet gripes: the conflation of millennials with college students. Whenever you hear about the millennial vote, it’s almost always illustrated by either college students or college grads. That’s fine, as long as it’s noted. But usually it’s not. And college grads are not representative of all millennials. In fact, as this chart shows, quite the contrary.