With the Democratic primary basically over, I want to step back a bit and explain the big-picture reason that I never warmed up to Bernie Sanders. It’s not so much that he’s all that far to my left, nor that he’s been pretty skimpy on details about all the programs he proposes. That’s hardly uncommon in presidential campaigns. Rather, it’s the fact that I think he’s basically running a con, and one with the potential to cause distinct damage to the progressive cause.

I mean this as a provocation—but I also mean it. So if you’re provoked, mission accomplished! Here’s my argument.

Bernie’s explanation for everything he wants to do—his theory of change, or theory of governing, take your pick—is that we need a revolution in this country. The rich own everything. Income inequality is skyrocketing. The middle class is stagnating. The finance industry is out of control. Washington, DC, is paralyzed.

But as Bill Scher points out, the revolution that Bernie called for didn’t show up. In fact, it’s worse than that: we were never going to get a revolution, and Bernie knew it all along. Think about it: has there ever been an economic 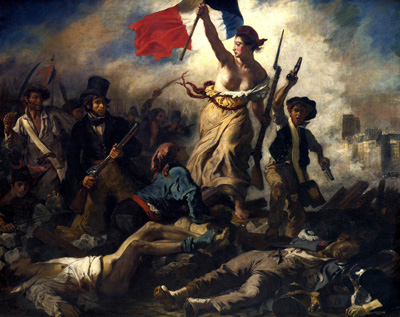 revolution in the United States? Stretching things a bit, I can think of two:

The first of these was 50+ years in the making and, in the end, required a bloody, four-year war to bring to a conclusion. The second happened only after an utter collapse of the economy, with banks closing, businesses failing, wages plummeting, and unemployment at 25 percent. That’s what it takes to bring about a revolution, or even something close to it.

We’re light years away from that right now. Unemployment? Yes, 2 or 3 percent of the working-age population has dropped out of the labor force, but the headline unemployment rate is 5 percent. Wages? They’ve been stagnant since the turn of the century, but the average family still makes close to $70,000, more than nearly any other country in the world. Health care? Our system is a mess, but 90 percent of the country has insurance coverage. Dissatisfaction with the system? According to Gallup, even among those with incomes under $30,000, only 27 percent are dissatisfied with their personal lives.

Like it or not, you don’t build a revolution on top of an economy like this. Period. If you want to get anything done, you’re going to have to do it the old-fashioned way: through the slow boring of hard wood.

Why do I care about this? Because if you want to make a difference in this country, you need to be prepared for a very long, very frustrating slog. You have to buy off interest groups, compromise your ideals, and settle for half loaves—all the things that Bernie disdains as part of the corrupt mainstream establishment. In place of this he promises his followers we can get everything we want via a revolution that’s never going to happen. And when that revolution inevitably fails, where do all his impressionable young followers go? Do they join up with the corrupt establishment and commit themselves to the slow boring of hard wood? Or do they give up?

I don’t know, but my fear is that some of them will do the latter. And that’s a damn shame. They’ve been conned by a guy who should know better, the same way dieters get conned by late-night miracle diets. When it doesn’t work, they throw in the towel.

Most likely Bernie will have no lasting effect, and his followers will scatter in the usual way, with some doubling down on practical politics and others leaving for different callings. But there’s a decent chance that Bernie’s failure will result in a net increase of cynicism about politics, and that’s the last thing we need. I hate the idea that we might lose even a few talented future leaders because they fell for Bernie’s spiel and then got discouraged when it didn’t pan out.

I’ll grant that my pitch—and Hillary’s and Barack Obama’s—isn’t very inspiring. Work your fingers to the bone for 30 years and you might get one or two significant pieces of legislation passed. Obviously you need inspiration too. But if you don’t want your followers to give up in disgust, your inspiration needs to be in the service of goals that are at least attainable. By offering a chimera instead, Bernie has done the progressive movement no favors.