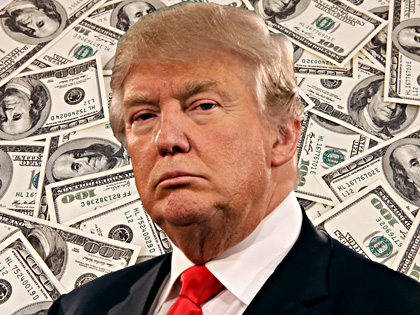 While I was busy over the weekend renovating the hub of my blogging empire, Donald Trump made his first-ever visit to the September 11 Memorial Museum in New York City. While there, he donated $100,000 to the museum:

Reporters who were invited late on Friday to join Mr. Trump for the museum visit, which was not on his schedule, were kept in a media van as he entered the museum. An aide said he would speak with reporters afterward, but Mr. Trump then decided against it. His aides sent out a photo of the Trumps inside the museum about 90 minutes later, along with a statement saying that the rebuilding of ground zero was “what ‘New York values’ are really about.”

The donation check was from Mr. Trump’s foundation, not from him personally. He had been approached over the years by people trying to raise money for the museum, but he never did, until Saturday.

Goodness. When did Trump become so media shy? Maybe it was because he knew the Washington Post was going to drop a story the next day about his repeated claim that he’s given over $100 million to charity in the past five years:

To back up that claim, Trump’s campaign compiled a list of his contributions—4,844 of them, filling 93 pages. But, in that massive list, one thing was missing. Not a single one of those donations was actually a personal gift of Trump’s own money.

Instead, according to a Washington Post analysis, many of the gifts that Trump cited to prove his generosity were free rounds of golf, given away by his courses for charity auctions and raffles.

…Many of the gifts on the list came from the charity that bears his name, the Donald J. Trump Foundation, which didn’t receive a personal check from Trump from 2009 through 2014, according to the most recent public tax filings. Its work is largely funded by others, although Trump decides where the gifts go.

…The most expensive charitable contributions on Trump’s list, by contrast, dealt with transactions related to real estate.
For one, Trump counted $63.8 million of unspecified “conservation easements.”…In California, for example, Trump agreed to an easement that prevented him from building homes on a plot of land near a golf course.

Generally speaking, I’m not keen on judging politicians by how much of their income they devote to charity. But Trump is in a different class. He claims to be worth $10 billion, and he claims to be an extremely generous guy. In fact, he’s a skinflint. His company’s CFO—who seems to double as Trump’s personal financial advisor—says that Trump really has made a lot of personal charitable contributions, but “we want to keep them quiet. He doesn’t want other charities to see it. Then it becomes like a feeding frenzy.”

Uh huh. I will leave the credibility of that statement as an exercise for the reader. Speaking for myself, I think it’s no coincidence that Trump’s two primary residences are near the Brooklyn Bridge and the Florida swamps.