The Guardian decided to analyze their corpus of 70 million comments to see who gets the most abuse. The results won’t surprise you:

Of course, certain subjects invited more abuse than others: 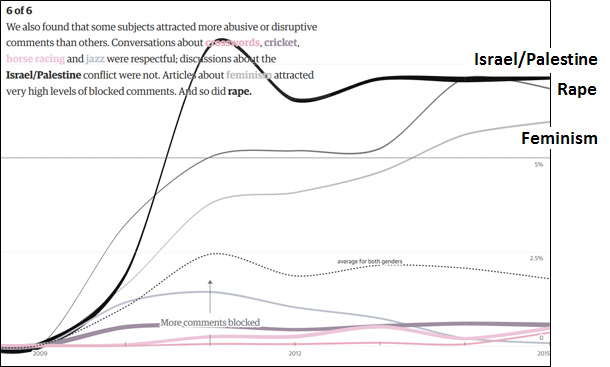 And abuse that starts in one place can spread astonishingly quickly via social media:

Avalanches happen easily online. Anonymity disinhibits people, making some of them more likely to be abusive. Mobs can form quickly: once one abusive comment is posted, others will often pile in, competing to see who can be the most cruel. This abuse can move across platforms at great speed—from Twitter, to Facebook, to blogposts—and it can be viewed on multiple devices—the desktop at work, the mobile phone at home. To the person targeted, it can feel like the perpetrator is everywhere: at home, in the office, on the bus, in the street…This must surely have a chilling effect, silencing people who might otherwise contribute to public debates—particularly women, LGBT people and people from racial or religious minorities, who see others like themselves being racially and sexually abused.

Is that the kind of culture we want to live in?

Is that the web we want?

The article also includes a short quiz: Which comments would you ban? I disagreed with two out of eight of their real-life examples.