The last couple of weeks have been pretty hard on Donald Trump, and he’s showing the strain by turning up the insult meter to 11. His favorite quarry, of course, is Megyn Kelly: 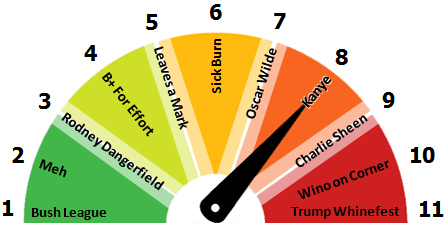 Plus there’s been all this in just the past couple of days:

$35M of negative ads against me in Florida…. Stuart Stevens, the failed campaign manager of Mitt Romney’s historic loss…. lyin’ Ted Cruz has lost so much of the evangelical vote…. @WSJ is bad at math….Who should star in a reboot of Liar Liar- Hillary Clinton or Ted Cruz?…. Lyin’ Ted Cruz lost all five races on Tuesday.

@EWErickson got fired like a dog from RedState…. millions of dollars of negative and phony ads against me by the establishment…. Club For Growth tried to extort $1,000,000 from me…. Lyin’ Ted Cruz should not be allowed to win [in Utah] – Mormons don’t like LIARS!…. Mitt Romney is a mixed up man who doesn’t have a clue.

I’ll grant that Trump has a point about the Wall Street Journal. Their editorial page really is bad at math. The rest is just a sustained whinefest from a guy who judges everyone in the world by the standard of how sycophantic they are toward Donald Trump. His preoccupation with Megyn Kelly prompted this from the normally mild-mannered Bret Baier:

Enough. @megynkelly is not crazy-she’s not sick. We’ll continue to cover this race fairly. https://t.co/8eKaVTLhd0 https://t.co/hiVJtV0zQN

Fox favorite Geraldo Rivera, no shrinking violet, said Trump’s obsession with Kelly “is almost bordering on the unhealthy.” Almost? Fox News itself followed up with a barrage of anti-Trump tweets and this statement on Facebook:

Donald Trump’s vitriolic attacks against Megyn Kelly and his extreme, sick obsession with her is beneath the dignity of a presidential candidate who wants to occupy the highest office in the land….As the mother of three young children, with a successful law career and the second highest rated show in cable news, it’s especially deplorable for her to be repeatedly abused just for doing her job.

So there you have it. It’s Fox vs. Trump yet again. So far, I don’t think Fox has won any of these street fights, but maybe they’re due. I guess it depends on whether they keep it up, or lamely make amends the way they usually do.

Finally, in other Trump news, this is from an interview he did a couple of days ago. What’s with the mustache? 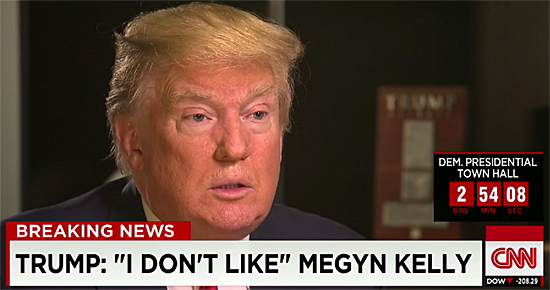