Over at the Atlantic, Paul Bloom writes that we’re generally less happy when our minds are wandering. He bases this mostly on a bit of research published a few years ago in which people with iPhones were pinged periodically and asked to report their current level of happiness:

Multilevel regression revealed that people were less happy when their minds were wandering than when they were not, and this was true during all activities….Although negative moods are known to cause mind wandering, time-lag analyses strongly suggested that mind wandering in our sample was generally the cause, and not merely the consequence, of 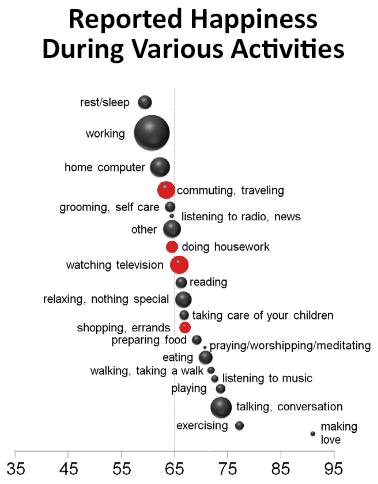 Interesting! But I was actually a little more taken by the chart showing reported happiness during various kinds of activities. There’s surprisingly little variation between stuff usually considered horrible and stuff usually considered enjoyable. Take a look at the red circles. Commuting produces only slightly less happiness than average. Housework is dead average. Watching television is only slightly better than housework and commuting.

Among common activities, rest and working are the worst, while playing and talking are the best. Working on a home computer is worse than commuting—which I probably could have guessed. But who knows? Maybe computers have gotten more enjoyable since 2010.