At tonight’s debate, Hugh Hewitt asked the candidates if they’d be willing to commit a substantial number of ground troops to fight ISIS, even though it means getting in the middle of a Sunni-Shia civil war. Here’s what they said:

CRUZ: We need to do whatever is necessary to utterly defeat ISIS….We’re not using our overwhelming air power. We’re not arming the Kurds. Those need to be the first steps. And then we need to put whatever 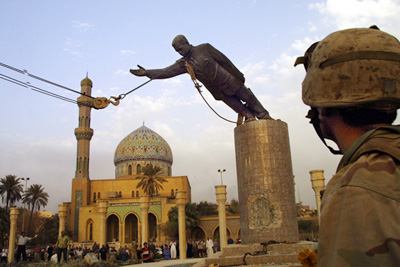 ground power is needed to carry it out.

KASICH: You have to be in the air and you have to be on the ground. And you bring all the force you need. It has got to be “shock and awe” in the military-speak. Then once it gets done, and we will wipe them out, once it gets done, it settles down, we come home and let the regional powers redraw the map if that’s what it takes.

TRUMP: We really have no choice….I would listen to the generals, but I’m hearing numbers of 20,000 to 30,000. We have to knock them out fast. And we have to get back home. And we have to rebuild our country which is falling apart.

There are some minor nuances here, but basically all three of them said they’d be willing to send a big ground force to Iraq. (Rubio didn’t get a chance to answer the question.) I don’t know if this is precisely a new position for any of them, but it’s sure the most explicit they’ve been about it on a debate stage. In previous debates, they’ve mostly focused on everything except ground troops. Now, suddenly, they all sound like they’re gung-ho on sending over a couple of divisions. It’s 2003 all over again.

And just to make it even more 2003-esque, you have Kasich and Trump insisting that we could get in and out lickety split. That’s exactly what George Bush told us too, but even with 100,000 troops it turned out to be a little harder than he thought. It sure sounds like history is starting to repeat itself, and not in a good way.