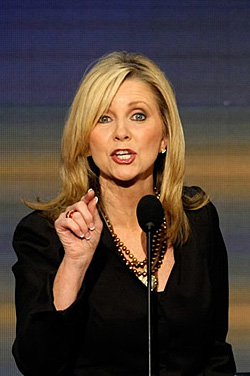 No, sir, I am not going to answer that.

Fascinating! What exactly is it that Blackburn is so loath to answer—and so unable to defend? Well, it turns out that she wants to issue a subpoena to get the names of individual medical researchers who use fetal tissue, and Rep. Jerrold Nadler wants to know why. Steve Benen picks up the story:

The committee has no rules in place to protect the names of those subpoenaed — raising the possibility of Congress effectively painting targets on the backs of scientists and researchers for no particular reason other than the Republicans’ desire for a culture war.

Rep. Jan Schakowsky (D-Ill.), the top Democrat on the panel, described the investigation as a “partisan and dangerous witch hunt, and added, in reference to Blackburn, “The chair’s abuse of her position as chair to compel this information is reminiscent of Senator Joe McCarthy’s abusive tactics.”

Nadler himself was more pointed, suggesting that if the names get leaked, it would make the committee “complicit with any physical assaults or murders of these people.” But Blackburn forged ahead anyway. Why? Despite abundant evidence that there’s been no wrongdoing, she insisted that “there is something going on.” No doubt.