Phil Price points us today to an intriguing chart from the Department of Health and Human Services. It shows readmission rates within 30 days of a hospital stay for Medicare patients—including both “official” readmissions and short-term “observations”—and it’s pretty stunning. When Obamacare passed, readmission rates started to fall dramatically almost instantly. They fell most sharply for a subset of conditions specifically targeted by Obamacare, and by a smaller amount for other conditions. If this is accurate, it means that hospitals could 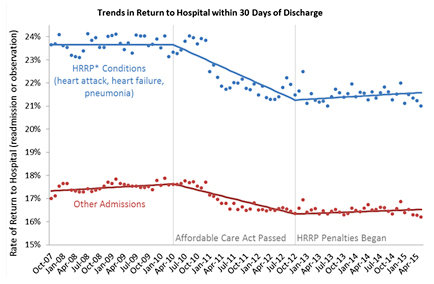 So how should we think about this? I’ll confess to some skepticism because the chart is almost too perfect. For four years the readmission rate is dead stable. Then, in a single month between December 2010 and January 2011 it suddenly drops by a full percentage point, and continues dropping for two years. This decline started about eight months after the passage of Obamacare, and it’s hard to believe that hospitals could react that quickly.

Then, the very instant that penalties begin for high readmission rates, everything stabilizes again. Apparently America’s hospitals unanimously decided that once they’d hit a certain level, that was good enough and they wouldn’t bother trying to improve even more.

Maybe. But even for those of us who believe in incentives, this is the damnedest response to a new incentive I’ve ever seen. I guess my advice is to treat this with cautious optimism. It looks like a great result, but as with most Obamacare outcomes, it’s too early to tell for sure how things are going to work out. When we have five or ten years of experience, we’ll start to be able to draw some concrete conclusions. Until then, we can say how things seem to be going so far, but not much more.