I think I’ve made it clear that I think more highly of Hillary Clinton than Bernie Sanders. I don’t make a big deal out of this because I like Bernie too. My inclination toward Hillary is clear, but it’s also fairly modest. Without diving into a long and turgid essay about this, here are a few quick bullet points explaining why I like Hillary:

Needless to say, Hillary also has weak points. She has decades in the public eye, and voters usually prefer candidates with more like 10-15 years of national exposure. What’s more, she obviously comes with a lot of baggage from those decades. On a policy level, I don’t get the sense that her foreign policy instincts have changed much based on events since 9/11, and that’s by far my biggest complaint about her. Finally, I’m not thrilled with political dynasties.

OK. That’s the throat clearing. The real point of this post is Matt Taibbi’s article explaining why he disagrees with Rolling Stone’s endorsement of Hillary. There are, obviously, arguments in Clinton’s favor, and there plenty against. But Taibbi’s is surprisingly thin. Here’s the nut of it:

The implication [of the endorsement] is that even when young people believe in the right things, they often don’t realize what it takes to get things done. But I think they do understand….The millions of young voters that are rejecting Hillary’s campaign this year are making a carefully reasoned, even reluctant calculation about the limits of the insider politics both she and her husband have represented.

For young voters, the foundational issues of our age have been the Iraq invasion, the financial crisis, free trade, mass incarceration, domestic surveillance, police brutality, debt and income inequality, among others. And to one degree or another, the modern Democratic Party, often including Hillary Clinton personally, has been on the wrong side of virtually all of these issues.

Let’s go through those one by one.

The financial crisis: Taibbi doesn’t even bother making an argument for this aside from some snark about the speeches Hillary gave to Goldman Sachs. But that’s just petty point scoring. Beyond that, it’s plainly unfair to blame her by association for legislation signed by Bill, which she had no hand in. And look: the only Clinton-era law that probably had a significant effect on the financial crisis was the Commodity Futures Modernization Act, which was supported by 83 percent of the House and 100 percent of the Senate. Even Bernie voted for it. The truth is that Hillary’s positions on Wall Street reform are reasonably solid.

Free trade: This is a “foundational issue” for millennials? Starting in the late 90s, there was a 3-4 year period of anti-globalization protests, and that was about it for high-profile attention. Most millennnials were barely in their teens at that point. A recent Gallup poll asked Americans if increased trade was good or bad, and 35 percent said it was bad. Among millennials, it was 32 percent, lower than most other age groups. Trade is getting a lot of attention lately thanks to TPP and Donald Trump, but it’s just never been a foundational issue for millennials.

Mass incarceration: This again? Taibbi says that Bill Clinton “authorized more than $16 billion for new prisons,” and slams Hillary because she “stumped for that crime bill, adding the Reaganesque observation that inner-city criminals were ‘super-predators’ who needed to be ‘brought to heel.'” The truth: Bill Clinton had barely any effect on incarceration; Hillary’s “super-predator” remark was reasonable in context; and both Clintons have long since said they regretted the carceral effects of the 1994 crime bill—which, by the way, Bernie Sanders voted for. Give it a rest.

Domestic surveillance: Taibbi doesn’t actually say anything further about this, but I’ll grant that I prefer Bernie’s instincts on this issue, just as I prefer his instincts on most national security issues. But anyone who thinks Bernie could make a dent in this is dreaming. In concrete terms, mass surveillance enjoys substantial public support and virtually unanimous support among elites and lawmakers—and that’s after the Snowden revelations, which were basically the Abu Ghraib of mass surveillance. It’s really not clear that in practice, Bernie would do much more about this than Hillary.

Police brutality: Bernie barely even mentioned this until he was the target of protests from Black Lives Matter a few months ago. It’s hardly one of his go-to subjects, and there’s no real reason to think Hillary’s position is any less progressive than his. In any case, this is almost purely a state and local issue. As president, neither Hillary nor Bernie would be able to do much about it.

Debt and income inequality: Once again, Taibbi doesn’t bother to say much about this. Here’s his only actual argument: “Hillary infamously voted for regressive bankruptcy reform just a few years after privately meeting with Elizabeth Warren and agreeing that such industry-driven efforts to choke off debt relief needed to be stopped.” But this is just plain false. And while there’s no question that Bernie is stronger than Hillary on Wall Street issues, both rhetorically and in practice, Hillary has generally been pretty 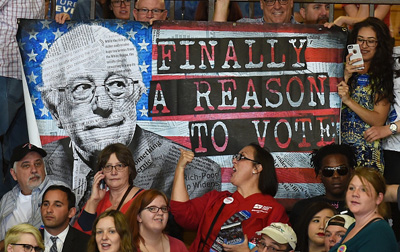 strong on all these issues too. And her proposals are generally a lot more serious and a lot more practical than Bernie’s.

Put this all together and here’s what you get. Hillary’s instincts on national security are troublesome. If that’s a prime issue for you, then you should vote against her. It’s certainly the issue that gives me the most pause—though I have some doubts about Bernie too, which I mention below.

She also lags Bernie in her dedication to bringing Wall Street to heel. But this is a much trickier subject. Bernie has thunderous rhetoric, but not much in the way of plausible plans to accomplish anything he talks about. Frankly, my guess is that neither one will accomplish much, but that Hillary is actually likely to accomplish a little more.

In other words, there’s just not much here aside from dislike of Hillary’s foreign policy views. That’s a completely legit reason to vote against her, but it’s hard to say that Taibbi makes much of a case beyond that.

Bernie Sanders too often lets rhetoric take the place of any actual plausible policy proposal. He suggested that his health care plan would save more in prescription drug costs than the entire country spends in the first place. This is the sign of a white paper hastily drafted to demonstrate seriousness, not something that’s been carefully thought through. He bangs away on campaign finance reform, but there’s virtually no chance of making progress on this. The Supreme Court has seen to that, and even if Citizens United were overturned, previous jurisprudence has placed severe limits on regulating campaign speech. Besides, the public doesn’t support serious campaign finance reform and never has. And even on foreign policy, it’s only his instincts that are good. He’s shown no sign of thinking hard about national security issues, and that’s scarier than most of his supporters acknowledge. Tyros in the Oval Office are famously susceptible to pressure from the national security establishment, and Bernie would probably be no exception. There’s a chance—small but not trivial—that he’d get rolled into following a more hawkish national security policy than Hillary.

I’m old, and I’m a neoliberal sellout. Not as much of one as I used to be, but still. So it’s no surprise that I’m not always on the same page as Taibbi. That said, I continue to be surprised by the just plain falseness of many of the left-wing attacks on Hillary, along with the starry-eyed willingness to accept practically everything Bernie says without even a hint of healthy skepticism. Hell, if you’re disappointed by Obama, who’s accomplished more than any Democratic president in decades, just wait until Bernie wins. By the end of four years, you’ll be practically suicidal.