A ranking of the various kinds of American health care on a “socialized medicine” scale of 1 to 10 would look something like this:

If you’re a hardcore libertarian, which program would you be most eager to privatize? The VA, of course, which is America’s only genuine example of purely socialized medicine. In the past, the VA’s status as health care provider to military vets has protected it from attack, but that’s changed over the past few years. Why? Because of a carefully orchestrated smear campaign by a Koch-funded activist group called Concerned Veterans for America. Over at the Washington Monthly, Alicia Mundy reports:

Though the CVA’s incorporation papers don’t reveal its donors, Wayne Gable, former head of federal affairs for Koch Industries, is listed as a trustee. The group also hired Pete Hegseth as its CEO…a seasoned conservative activist, having been groomed at a series of organizations connected to—and often indirectly funded by—the Koch brothers.

…Hegseth became a fixture on Fox and was a guest on Bill Maher’s show….By late 2013, Hegseth and the CVA were making the case that the VA needed “market-based” reform that provided vets with more “choice” to receive care from private doctors and hospitals.

…Then, on April 9, 2014, at a hearing in the House Committee on Veterans’ Affairs, Representative [Jeff] Miller dropped the bomb. He announced that his staff had been quietly investigating the VA hospital in Phoenix and had made a shocking discovery: some local VA officials had altered or destroyed records to hide evidence of lengthy wait times for appointments. And worse, Miller claimed, as many as forty veterans could have died while waiting for care.

This latter charge guaranteed screaming headlines from the likes of CNN, but was later shown to be unsubstantiated…In only twenty-eight out of the more than 3,000 patient cases examined by the inspector general was there any evidence of patient care being adversely affected by wait times…In most VA facilities, wait times for established patients to see a primary care doc or a specialist were in the range of two to four days…For the VA system as a whole, 96 percent of patients received appointments within thirty days.

In short, there was no fundamental problem at the VA with wait times, in Phoenix or anywhere else.

For example, this chart shows how the VA compares on various measures of outpatient diabetes care: 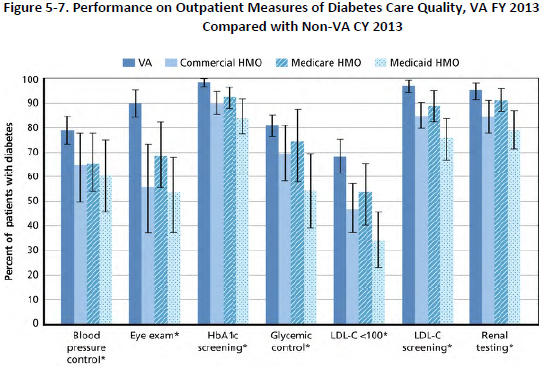 During the Clinton administration, the quality of VA care was dramatically improved by Dr. Kenneth Kizer. When George Bush took office, he slowly but steadily eroded Kizer’s work. Control was centralized in Washington; services were outsourced, leading to both higher cost and lower quality; VA eligibility standards were tightened, which resulted in time-consuming new processes to determine if new applicants were eligible for VA care; the Iraq War produced a flood of new patients; construction of new facilities was delayed; and all of this together caused wait lists for admission to the VA to skyrocket.

Obama’s nominee to head the VA, Army General Eric Shinseki, quickly cut the backlog of unprocessed claims by 84 percent and instituted other reforms as well. But the scandal in Phoenix, with the fans flamed by Hegseth and the CVA, eventually forced Shinseki to resign. It also cracked open the door to privatizing the VA:

Legislation that came to be known as the Veterans’ Access to Care through Choice, Accountability, and Transparency Act…called for the creation of a “Choice Card” system that was designed as a first step toward privatizing VA health care services. Under the statute, veterans who lived forty miles from a VA hospital or had to wait more than thirty days for a VA appointment were promised that they could use their Choice Card to receive care from a network of private providers, much like one would use a private health insurance card.

The basic idea of the VA partnering more with private providers was not flawed in principle…Done right, closer collaboration between VA and non-VA providers could improve care for everyone in many areas. But the new legislation set in motion a “choice” program in which the government would be paying for bills submitted by private providers for care that was unmanaged, uncoordinated, and, to the extent that it replicated the performance of the private health care system, often unneeded. This is the very opposite of the integration and adherence to evidence-based protocols that has long made VA care a model of safety and effectiveness.

Worse, implementation of the Choice Card was a disaster from every point of view. Congress gave the VA only ninety days to stand up the program. Largely because of that insane time line, the VA was able to attract bids from only two companies. Each of these has a sole contract that gives it a monopoly wherever it operates, and each put together networks that were so narrow and poorly administered that that for many months vets who received Choice Cards typically could not find a single doctor who would accept them.

Everything is going according to plan! First, create a system that enriches private providers and is almost certain to make service worse. Then blame the crappy service on the old, bureaucratic VA and insist that only further privatization can fix it. Rinse and repeat. Eventually your donors are rich and the VA has been dismantled. Victory!