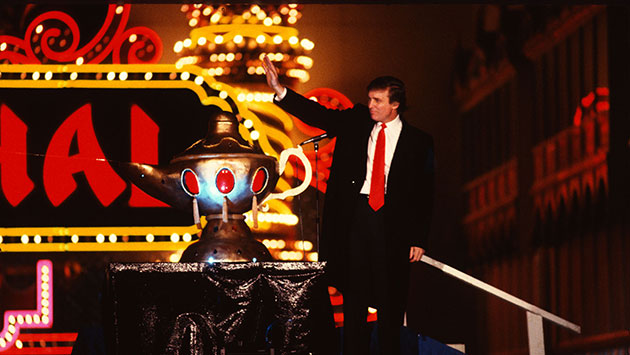 It’s pretty common knowledge that Donald Trump lies routinely about his wealth and his businesses. He can get away with this because he runs a private company and isn’t required to open his books to the public.

But there was one period in his life when he ran a public company. Here’s the backstory: During the ’80s, Trump invested heavily in Atlantic City casinos. He ended up owning three of them, culminating in the Trump Taj Mahal, a billion-dollar monstrosity that was ill conceived and poorly run, hemorrhaging money from the day it opened. Trump had borrowed heavily during this period, guaranteeing many of the loans personally, and this was the last straw. His company was bankrupt.

He would have been personally bankrupt, too, but his creditors decided to put him on a leash and let him try to work his way out. He made steady progress, but the casinos continued to be a millstone around his neck. By the mid-’90s, however, the stock market was getting hot and lots of small investors, then as now, were mesmerized by the Trump name. So Trump decided that as long as there were lots of rubes who still thought he was a great businessman, he might as well take advantage of them. Timothy O’Brien tells the story in TrumpNation:

In a masterstroke of financial maneuvering, and in a tribute to the sucker-born-every-minute theorem, [Trump] managed to take two of the Trump casinos—the Plaza and the Taj Mahal—public in 1995 and 1996, at a time when Donald was unable to make his bank payments and was heading toward personal bankruptcy. The stock sales allowed Donald to buy the casinos back from the banks and unload huge amounts of debt. The offering yanked Donald out of the financial graveyard and left him with a 25 percent stake in a company he once owned entirely.

…In one fell swoop someone else became responsible for the debts that almost sank Donald…Exactly what investors thought they might get for their Trump Hotels investment wasn’t entirely clear. Donald had already demonstrated that casinos weren’t his forte, and investors were buying stock in a company that was immediately larded with debts that made it difficult, if not impossible, to upgrade the operations.

…Allan Sloan, the financial writer who had opined with great accuracy on many things Trump, offered a fair warning to Trump Hotels’ investors: “Shareholders and bondholders have to be total fools ever to think that Donald Trump will put their interests ahead of his own.”…Donald spent several years proving Sloan correct. 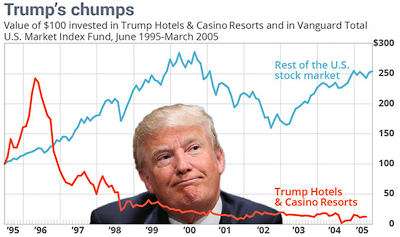 $100 million more than analysts thought it was worth…sending the company’s stock into a nosedive from which it never recovered.

…Although Trump Hotels’ shares were sinking and there were no earnings to be seen, Donald paid himself $7 million for his handiwork at the company in 1996…Jerry Useem at Fortune took note in 2000 of Donald’s “disquieting” tendency to “use the casino company as his own personal piggy bank.” In addition to the multimillion-dollar bonuses Donald was lifting out of Trump Hotels, Useem pointed out that “the pilots of his personal 727 are on the casino company’s payroll” and that in 1998 Donald “had the already cash-strapped company lend him $26 million to pay off a personal loan.”

Trump’s fans were conned into buying up his debt-laden properties and turning them into a public company. Trump, who plainly had no interest in running a casino and had demonstrated no corporate management skills during the prior decade, paid himself millions of dollars from the company’s coffers for doing essentially nothing. He then unloaded his third casino onto the public company at an inflated price.

The public company didn’t show a profit during a single year of its existence. In 2004 the stock was delisted and the company forced into Chapter 11 reorganization. It was renamed Trump Entertainment Resorts, but with Trump still at the helm it continued to pile up losses and amassed debts of nearly $2 billion. In 2008, after missing a $53 million bond payment, it declared bankruptcy yet again and Trump resigned as the company’s chairman. Its investors lost all their money.

In case you’re curious, this is how Trump treats the little people. Some of the investors in his casinos were big guns who should have known better. But plenty of them were moms and pops who believed Trump when he insisted he was the greatest businessman the world had ever known. Trump didn’t care: He figured he could fleece them, and he did. That’s what happens to people who trust Donald Trump.