Good news! If you call the IRS, they’ll probably answer this year. The bad news is that this is purely temporary:

The reduced wait times during tax-filing season, which ends April 18, were possible because of a cash infusion from Congress, but they only temporarily obscure continued problems at the U.S. tax agency. Audits are down. Identity theft is persistent. Tax lawyers gripe about the lack of published rules….“I can certainly understand the displeasure that Congress has,” said Fred Goldberg, who ran the IRS under President George H.W. Bush. “You can shoot at the IRS, but the issue is collateral damage, and the collateral damage on taxpayers is huge.” 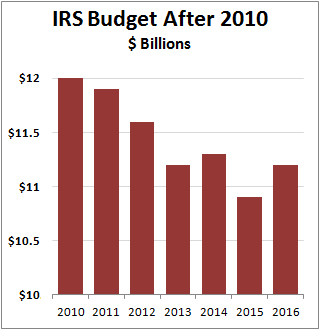 level. Congressional Republicans have already declared that a non-starter, which means reduced audits and longer wait times will continue.

Republicans would like to do away with the IRS. That’s what they keep saying, anyway. They want all your taxes on a postcard, or a 3-page tax code, or an abolition of income taxes entirely.

But this all works out well anyway. The bigger picture looks like this:

This works for lots of other agencies too. Basically, you do everything you can to gum things up, then use this as evidence that government is incompetent. But it works especially well for agencies like the IRS, which no one likes in the first place. The fact that it helps out corporations and rich people is just a nice cherry on top.