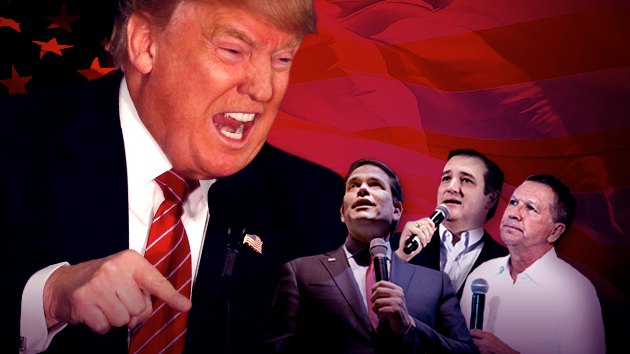 Well, I got one question answered tonight: Marco Rubio has apparently decided to put all his eggs in the attack basket. He didn’t try to talk over Trump quite as much as last time, but he attacked just as hard.

Policywise, there was nothing much new tonight. Big surprise, huh? On the insult front, Trump repeated “Little Marco” and “Lyin’ Ted” several times, which is way too kindergarten even for him. What’s possibly worse is that Trump got seriously ruffled by Megyn Kelly’s questions about Trump University. For example:

KELLY: The rating from the Better Business Bureau was a D-minus, that’s the last publicly available rating in 2010, and it was the result of a number of complaints they had….

TRUMP: But it was elevated to an “A.”

I have a feeling we’re going to be waiting a long time for tomorrow to come, just like we’re waiting for the 25 clippings and the announcement of the foreign policy team. But we’ll see. In any case, Kelly also pointed out that an appellate judge said “the plaintiffs against you are like the Madoff victims” and then threw out Trump’s countersuit, forcing him to pay $800,000 in legal fees. She also 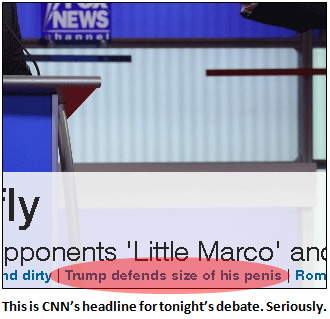 pointed out that although Trump keeps saying the suit could be settled very quickly, it’s been going on for five years.

Will this hurt him? You’d think it might, but we’re living in bizarro world these days, so who knows?

Rubio and Cruz also went after Trump pretty hard on the off-the-record portion of his interview with the New York Times. Release the tape, Donald! Cruz went so far as to suggest that maybe Trump was lying about the wall. I doubt this is going to have much impact, but it did produce the amusing spectacle of Trump self-righteously defending the honor of the off-the-record process: “I think being off the record is a very important thing. I think it’s a very, very powerful thing….I would always honor that….I have too much respect for that process to say, just release everything.” Holy cow. This from the guy who whines endlessly about the media being dishonest and libel law needing to be changed so he can sue them more.

(This has occasioned a lot of talk about whether the Times would release the tape even if Trump asked them to. But everyone seems to be missing the point that Trump almost certainly has his own copy of the tape, or else a tape that he made himself. He doesn’t need to talk anyone into anything.)

On another front, I was amused by Trump’s excuse for initially saying he’d accept Syrian refugees because it was a humanitarian crisis. “First time the question had been put to me, it was very early on. The migration had just started. And I had heard that the number was a very, very small number….By the second day, two or three days later, I heard the number was going to be thousands and thousands of people….I changed my tune. And I don’t think there’s anything wrong with that.”

LOL. This was in September. Refugees had been in the news for months. They were washing up on the shores of Greece by the tens of thousands. Europe was expecting more than a million refugees by the end of the year. Television was plastered with images of refugees on the beaches, refugees trudging along roads, and refugees in camps. And now Trump is saying “the migration had just started.” But even with all that, he claims he didn’t realize that the US was talking about 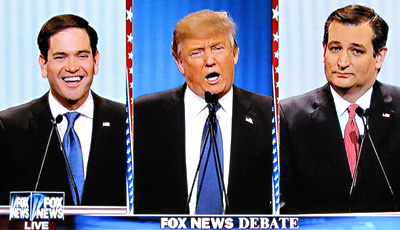 taking in “thousands” of refugees—as if that’s some kind of gigantic number for a country of 300 million. I’m not sure which is scarier: that he’s lying or he’s telling the truth.

OK, so how did everyone do? I think Trump took some hits. But I always say that, don’t I? A lot of it depends on how things play out over the next few days. Trump opened himself up to some attacks, and if that starts a bit of a media frenzy, it could hurt him. But will it hurt him enough to cost many votes over the next couple of weeks? Probably not.

Rubio and Cruz both did OK, but I didn’t get the sense that either one of them really broke out. Kasich did better than usual with his “adult in the room” schtick, but not enough to make him a player. He’s still a distant fourth.

10:53 – This is a little hard to judge, but I’d say tonight’s debate is less of a scrum than last time but more of an insult fest.

10:51 – Kasich is taking us on a world tour again. I think he’s done this in every debate. But he ran out of time tonight and only got halfway around the world.

10:41 – Cruz: “Breathe, Donald.” Trump: “Lyin’ Ted.” This is so uplifting. It makes me proud to be an American. Also: Trump needs to work on his insults. He’s repeating himself too much.

10:37 – Hmmm. Both Cruz and Trump tap danced a bit on gay marriage by saying it should be a state issue.

10:29 – Wallace: OK, enough about destructive left-wing politics. What would you actually do to bring back manufacturing jobs? Cruz: repeal Obamacare, pull back the EPA, and pass the Cruz tax plan. Yeah, that’ll work.

10:27 – Wallace: What would you do to bring back manufacturing jobs to Detroit? Cruz: Detroit has been decimated by 60 years of left-wing politics. The media should be telling this story.

10:22 – Rubio: The really terrible thing about Flint is the fact that Democrats politicized it.

10:16 – Cruz: If we nominate Donald, we’ll go into this fall with a candidate facing a fraud trial. Trump is getting pretty ticked off about the Trump U stuff. “Give me a break, it’s a minor bit of civil litigation.” Trump keeps trying to make it sound like there are just one or two malcontents behind the suits. They’re actually class actions. Not so minor.

10:11 – Oh man, Trump is getting crushed on Trump University. His old nemesis, Megyn Kelly, says Trump U got a D- from the Better Business Bureau, not an A. And a judge 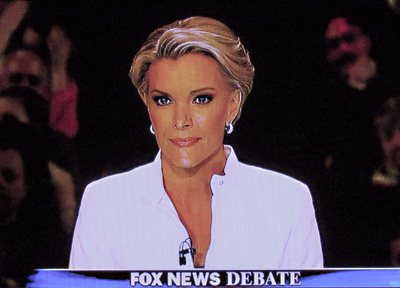 10:06 – Trump is claiming that when he first said we should admit Syrian refugees, he thought there were just a tiny number of them. That was early September. LOL. Germany alone had processed 200,000 asylum applications by then and was projecting 800,000 by year’s end. Greece had accepted 150,000 refugees. And Trump thought it was just a little trickle?

10:02 – Trump: We have to stay in Afghanistan because it’s right next to Pakistan, and Pakistan has nuclear weapons. What?

9:52 – What if the military refuses to obey Trump’s orders to torture prisoners? Trump: “They won’t refuse me, believe me.” Also: “I’m a leader…I’ve never had any problems leading people. If I say do it, they’re going to do it.”

9:49 – We shouldn’t have attacked Libya. Qadaffi was working with us.

9:45 – Cruz hitting Trump for hiring foreigners at Mar-a-Lago. Also going after Trump hard on the NYT interview. Maybe he doesn’t really want to build a wall!

9:37 – Trump has “too much respect for that process” to ask the New York Times to release the tapes of his off-the-record conversation. Yes, he actually said that.

9:33 – Trump now defending off-the-record conversations with the press. He would never, ever, breach that promise. It’s a matter of honor. Seriously. This is surreal. Is this the same guy who wants to change the libel laws so he can sue the press more?

9:31 – Trump is now claiming that he wrote checks to Hillary’s 2008 campaign because….something. It was business, not personal.

9:23 – Chris Wallace says Trump’s tax plan would add $10 trillion to the deficit and wants to know how Trump is going to make up for that. Trump says he’ll eliminate the Department of Education and virtually all of the EPA. Chris Wallace is ready with PowerPoints (!) and says this wouldn’t come anywhere near to closing the deficit. Trump wanders into a disquisition about negotiating better deals. He will save $300 billion in drug costs, which is more money than the federal government spends on drugs in the first place.

9:20 – I was really hoping Trump would defend Trump steaks. But he disappointed me. He did finish up with a gibe toward “little Marco,” though.

9:13 – Kasich is once again reminding everyone that he used to be chair of the House Budget Committee. Does he really think anyone cares?

9:06 – On national TV, Trump just defended the size and virility of his package. Seriously.

9:03 – Mr. Trump, can you respond to Mitt Romney on substance, not insults? Trump: “Mitt Romney is a loser.”

8:54 – So how do you think this is going to go down? It seems like Marco Rubio has been getting a lot of pressure to tone down the Trumpesque insult rhetoric, so perhaps we’ll see a less combative Marco tonight. But I don’t think the conventional wisdom is right. I mean, the old Marco was pretty clearly not working, right? So he has to try something, even if it’s a longshot. Besides, this is one of the things that’s kept Trump so Teflon: nobody ever sustains their attacks on him. They hit him for a few days and then give up. I say: hit him and keep hitting him. At least that gives you a chance of hitting a sore spot and provoking a meltdown of some kind. If Rubio doesn’t try something different, he might as well just give up now.

8:45 – The debate starts in just a few minutes. It’s time to butter your popcorn.