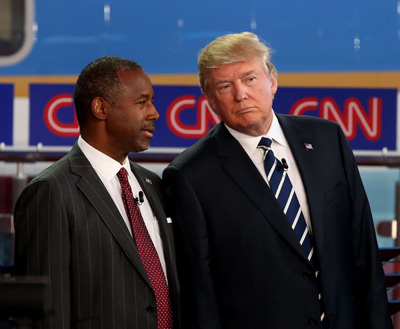 violence at his rallies, saying that protesters should be punched out and carried away on a stretcher, and promising to pay the legal bills of those who throw the punches.

….Carson has talked about the need for a president to understand poverty, yet has endorsed a multi-million dollar inheritor who has spent his entire career leaving others impoverished by walking out on his debts, but refusing to pay full bills, and by trying to use to power of the state to seize their land. Worse, Carson is endorsing a man who has mocked his religion and who quite literally likened him to a child molester. In doing so, Dr. Carson has disgraced himself.

Fair points! But Carson deserves a defense. Here it is:

Oh, did you think I was going to defend Carson on moral grounds? So silly. Ben Carson has been grifting the conservative movement for years. He knows the main chance when he sees it, and right now Trump offers him the best prospect of staying in the spotlight and selling more books. I wonder if Trump will make him stand obediently behind him during his next rally, like he did with Chris Christie?