A couple of days ago I blasted the Bernie Sanders campaign for touting a stupendously optimistic study by economist Gerald Friedman of how their domestic spending plans would supercharge economic growth. This was based on a simple fact: the projections were far higher than anything in postwar US history.

But I got to pondering this a bit more. The Friedman study projected very high GDP growth, which is just a combination of workforce growth and productivity growth. You can increase GDP by having more workers, or by keeping the same number of workers and making them more productive. The study suggested that Sanders’ programs would increase workforce participation by a huge amount, but I figured I’d let that go for now. I was more interested in the 3.18 percent average annual productivity growth over a decade. That’s was pretty wild: we’ve never done that since World War II, and we’ve only come close twice. So how does Friedman justify this? Here it is in its entirety:

Higher demand for labor is also associated with an increase in labor productivity and this accounts for about half of the increase in economic growth under the Sanders program.18

That didn’t sound very promising. Friedman is projecting historically unprecedented productivity growth based on some old papers that examine an association proposed in 1949 between long-run GDP growth and productivity—which seems a bit circular for our purposes even if it’s true. That’s pretty thin.

Still, I was curious. Then on Thursday economist Jamie Galbraith mocked a severely critical letter from former CEA chairs because it roasted Friedman’s study without doing any actual analysis of his forecasts. Now, Galbraith was rather careful not to suggest that he actually thinks Friedman is right, but he nonetheless conceded only that one might “quibble” with Friedman’s productivity numbers. Overall, he said, Friedman’s methods were thoroughly mainstream. “When you dare to do big things, big results should be expected. The Sanders program is big, and when you run it through a standard model, you get a big result.”

Maybe so, though I continued to be pretty skeptical of Friedman’s rosy projections. So I decided to take another look at historical productivity figures to back myself up. This turned out to be far more difficult than I expected. You can get productivity figures from the BLS, the OECD, and from various academic estimates, and they’re all different. And none of them go back further than 1950 or so. Still, after an eye-blurring bit of work powered by dexamethasone, I came up with fairly reasonable estimates averaged from a few sources, including my own homebrew calculations. Then I broke them up into 20-year buckets, because 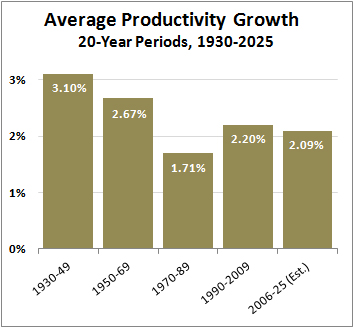 you frequently see productivity fall and then make up ground when you look at more than just a few years at a time. For the final bucket, I averaged actual numbers from 2006-15 with Friedman’s estimate for 2016-25. You can see the result on the right.

And it turns out that…Friedman isn’t projecting anything wildly out of the ordinary after all. However, I’d caution about two things. First, my productivity numbers might be wrong. Probably not by a lot, but maybe by a modest amount. Second, the final figure for 2006-25 assumes that Sanders’ programs can make up for the unusually dismal productivity numbers of 2006-15. I think there are good reasons to doubt that. Nonetheless, given past history it’s not insane to think it might happen if we implemented a pretty massive spending and stimulus program.

I dunno. Maybe you’re interested in this, maybe not. I’m still pretty skeptical myself since different ways of looking at the data make Friedman’s projections look a lot less plausible. In any case, I’m sure that qualified economists will weigh in with more sophisticated evaluations fairly soon. But I set out to take another whack at these projections, and I didn’t really get what I expected. So I figured I should share.