The current rate of poverty among the elderly is 9.8 percent, compared to 15.7 percent for those under age 65. But what about the future? The Social Security Administration projects that poverty rates will continue to decline for the elderly. About 7 percent of depression babies, who started retiring in 1990, currently live in poverty, compared to a forecast of 5.7 percent for Gen Xers, who 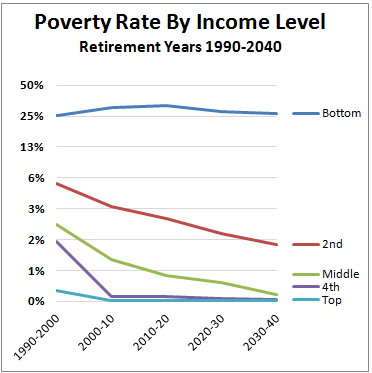 will begin retiring in 2030. However, these averages hide some stark differences:

Not all groups are expected to do so well. Among high school dropouts, poverty rates are projected to increase from 13.5 percent to 24.9 percent…before declining to 18 percent for [GenXers]….Given the projected increase in minorities and immigrants, as well as the historic increase in women’s labor force participation, retirees with low labor force attachment are increasingly low-educated, low-skilled, and disabled. Not surprisingly, those retirees are projected to have very high poverty rates.

By 2030, SSA forecasts that poverty will be all but eradicated for every income group except one: the very poorest. This is unsurprising but nonetheless far-reaching in its policy implications: If you are poor during your working career you will continue to be poor when you retire. If not, then not. Our retirement programs should be set accordingly.