If the future of my country weren’t at stake, I’d say that things are getting genuinely entertaining in the Republican primary race. Here is Marco Rubio this morning dishing on Donald Trump:

Let me tell you something, last night in the debate, during one of the breaks — two of the breaks — he went backstage, he was having a meltdown. First he had this little makeup thing applying, like, makeup around his mustache because he had one of those sweat mustaches. Then, then he asked for a full-length mirror. I don’t know why, because the podium goes up to here. But he wanted 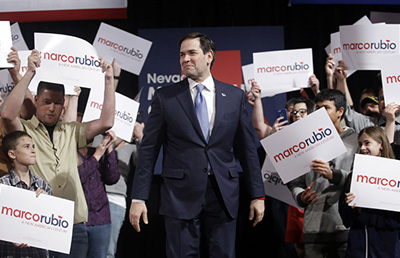 a full-length mirror. Maybe to make sure his pants weren’t wet — I don’t know.”

Fabulous! I can’t wait for Ted Cruz to join in too.

So what do they care about? That he’s tough. That he’s not PC. That he takes on the politicians and the media. So that’s where to hit him. Show that he’s all hat and no cattle. Show that he’s afraid to really tell the truth. Badger him on his tax returns. Tell stories about how he kowtows to reporters. And above all: whatever you say, say things outrageous enough to force the media to pay attention to you.

And not to put too fine a point on it, but there’s no need to be obsessively truthful in all this. Take Rubio’s little story above. I imagine it’s true. But if it’s exaggerated a wee bit—well, tell it anyway. And lots more like it. That’s what Trump does. If you can make Trump spend all his time denying that he’s a weenie by picking apart tiny details in your stories, you’re on the road to the White House.

POSTSCRIPT: This is just an aside, but am I the only one who finds it a little creepy that apparently Rubio can change his personality on a dime? I mean, he seems to have decided a couple of days ago to become a young Donald Trump, and he’s already doing a bang-up job. I think that even most professional actors would have trouble learning a new part that quickly.