So did President Obama kinda sorta endorse Hillary Clinton and her pragmatic approach to politics in his Springfield speech today? Not really. He was pretty focused on the bitterness and polarization of contemporary political culture and what 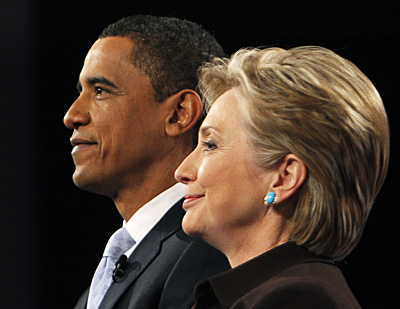 we could do about it. But there were a few places where he seemed like he was giving Hillary a little boost if you cocked your ears just right:

I learned by talking to your constituents that if you were willing to listen, it was possible to bridge a lot of differences….They understand the difference between realism and idealism; the difference between responsibility and recklessness. They had the maturity to know what can and cannot be compromised, and to admit the possibility that the other side just might have a point.

….Our progress has never been inevitable. It must be fought for, and won by all of us, with the kind of patriotism that our fellow Illinoisan, Adlai Stevenson, once described not as a “short, frenzied outburst of emotion, but the tranquil and steady dedication of a lifetime.”

….Trying to find common ground doesn’t make me less of a Democrat or less of a progressive. It means I’m trying to get stuff done….Rather than accept the notion that compromise is a sellout to one side, we’ve got to insist on the opposite — that it can be a genuine victory that means progress for all sides.

Obama’s defense of realism vs. idealism and his irritation toward “short, frenzied” outbursts of emotion could be read as implicit criticisms of Bernie Sanders. Likewise, his defense of his progressive record includes a deliberate echo of Hillary Clinton’s description of herself as a “progressive who likes to get things done.”

It’s not much, and it was relatively subtle. Still, even when he acknowledged that our democracy “seems stuck” and “we have to find a new way of doing business,” he didn’t endorse anything revolutionary. Quite the contrary. It became yet another chance to urge pragmatism and hard work: “In a big, complicated democracy like ours, if we can’t compromise, by definition, we can’t govern ourselves.”

It’s unfortunate for Hillary that she can’t defend this kind of politics effectively. Obama somehow makes the hard slog of slow change sound noble and heroic. Hillary makes it sound workmanlike at best and defeatist at worst. She may not ever have the simple kind of elevator pitch that Bernie Sanders has, but if she could make her brand of pragmatism sound just a little more uplifting—a little more vital—I’ll bet she’d be having a lot fewer problems right now.