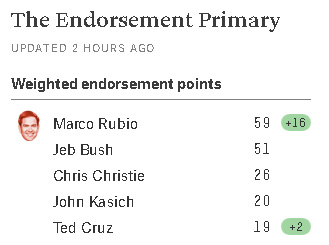 Over at FiveThirtyEight, they’re taking The Party Decides out for a spin by tracking the most important sign of just how the party decides: endorsements. This is allegedly the key metric for predicting the nomination, and they report that young Marco Rubio is now solidly in the lead and moving ahead quickly:

Although four more endorsements and a slight lead in points do not make Rubio a lock as the choice of Republican elected officials, this bump is a sign that members of Congress could be starting to see him as the most acceptable option for the nomination….Some politicians had put early support behind Jeb Bush — he had led our list since August — but since January the only new endorsement he has received was from former presidential candidate Sen. Lindsey Graham.

….Iowa caucus winner Ted Cruz has slowly been picking up points as well — he’s added seven since the beginning of the year — though he has yet to receive an endorsement from a sitting senator or governor.

Poor Ted. Everyone hates him, so the only endorsements he can get are from a few backbench House members. I guess he’ll show them when he’s sitting pretty in the Oval Office next year.