I am currently taking a drug that appears to be supercharging my brain. I even almost got into a Twitter argument today, which is surely the biggest waste of gray matter known to man. But I was full of energy, so off I went. I was also full of energy all last night, and I have to say you guys are all a bunch of slackers. At 3 am there were no new blog posts, no one making clever remarks on Twitter, no new email, no nothing. I was reduced to reading a book. If this keeps up, I’m going to have to make more friends in Australia and Europe to pick up the slack.

At a meeting with The Times’s editorial writers, Mr. Trump talked about the art of applause lines. “You know,” he said of his events, “if it gets a little boring, if I see people starting to sort of, maybe thinking about leaving, I can sort of tell the audience, I just say, ‘We will build the wall!’ and they go nuts.”

The charming thing is that he’s willing to admit this on the record to a bunch of reporters. He just doesn’t care, and he knows his supporters don’t care either. Basically, they’re all in on the con and enjoying themselves, so a little peek behind the scenes—”The Making of the Trump Campaign”—just piques their interest rather than disillusioning them. Not that they read the Times in the first place, so it probably doesn’t matter much what he says to their editorial board anyway.

And speaking of Trump, here is Thoreau explaining that he loves the guy because he’s smashing the Republican Party for us:

Some of you might doubt that Trump is deliberately doing good, and you’re probably right. But, hell, when the Hulk is smashing bad guys, do we really know for sure that he’s acting on his good side rather than just smashing for fun? Still, he’s smashing what we need him to smash. Well, same for Trump. I mean, FFS, he already dashed Scott Walker’s hopes of ever having a political career in Washington. That alone should make him the greatest liberal hero of the 21st century thus far.

What else? Gallup is always good for a laugh. They report this weekend that 50 percent of Americans think they’re better off economically today than they were eight years ago. But wait. Here’s how it breaks down by party affiliation:

In other words, this poll result is completely meaningless. I think it’s safe to say that both Democrats and Republicans have done about equally well over the past eight years, and Gallup even presents some more detailed polling results that pretty much prove this. But when you ask a very general question, even if it’s on a specific topic, what people hear is “Do you like President Obama?” And that’s the question 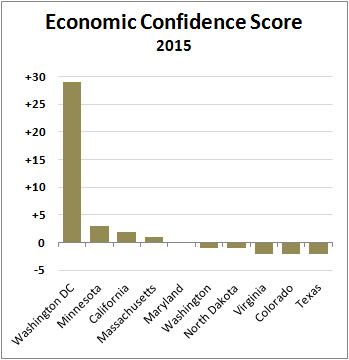 they’re answering. It’s all pure affinity mongering, and I’m sure the results would have been the mirror opposite if the question were asked in 2008 instead of 2016.

And as long as we’re at the Gallup site, here are the top ten results for economic confidence by state in 2015. I’m showing them to you for two reasons. First, California handily beat Texas. Hah! Second, Washington DC is simply on another planet—with Beltway neighbors Virginia and Maryland also doing pretty well, though in a more earthbound way. Conservatives are constantly griping about the way that folks who feed at the federal trough always manage to do great no matter how poorly the rest of the country is doing, and it seems like they might have a point.

And now I’m off to bed. Whether I’m also off to sleep remains an open question. I’ll let you know Monday morning.