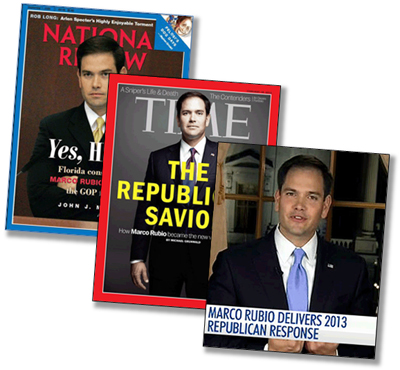 I was out to dinner last night—the duck at Il Fornaio was great!—so I missed the Republican debate. That was too bad, because apparently the highlight of the night was Chris Christie’s brutal beatdown of Marco Rubio over precisely the point I made a few days ago. Here’s my version:

To me he seems like a robot: he’s memorized a whole bunch of virtual index cards, and whenever you ask a question he performs a database search and recites whatever comes up. The index cards aren’t bad, mind you, and I suppose they allow him to emulate a dumb person’s notion what a smart person sounds like. This is despite the fact that he normally talks with the same kind of hurried clip employed by nervous eighth graders reading off actual index cards.

This has always been my basic take on Rubio, and it makes me a little puzzled by his appeal among the conservative intelligentsia. But maybe they don’t really care? Maybe they agree with Grover Norquist’s take on the presidency from four years ago:

Well, Rubio has the requisite number of working digits, and he’s reliably conservative even if he’s not one of the great thinkers of our age. So maybe it doesn’t matter if he’s a callow empty suit. As long as he signs the stuff that Ryan and McConnell send him, and can give a good speech now and then defending it, he’s aces. At a minimum, though, this requires Rubio to effectively hide his inability to think outside of sound bites. Christie shattered that illusion for good last night when he bluntly pointed out Rubio’s robotic repetition of the exact same puerile talking point within the space of a couple of minutes. Here’s conservative Rubio fan David French:

Marco Rubio’s already-famous exchange with Chris Christie was indeed a brutal moment. I still can’t believe that Rubio went back to the same talking point right after Christie called him on it. Watching it real-time, I honestly wondered if Rubio forgot what he just said. When he started to do the same thing a third time, I couldn’t believe my ears. Christie wasn’t masterful — not by any means — Rubio just served him the worst kind of hanging curve.

French compared this to Rick Perry’s famous “Oops” gaffe from 2012. James Fallows called it the “most self-destructive debate performance since Quayle ’88.” Social media immediately branded it the “Marcobot” moment, and mashups of the Rubio/Christie exchange showed up everywhere. Here’s the edited transcript:

CHRISTIE: That’s what Washington, D.C. Does. The drive-by shot at the beginning with incorrect and incomplete information and then the memorized 25-second speech that is exactly what his advisers gave him. See Marco, the thing is this. When you’re president of the United States, when you’re a governor of a state, the memorized 30-second speech where you talk about how great America is at the end of it doesn’t solve one problem for one person.

RUBIO [an hour later]: I think anyone who believes that Barack Obama isn’t doing what he’s doing on purpose doesn’t understand what we’re dealing with here, OK? This is a president who is trying to change this country.

So there you have it: the exact same canned line three times in a row. And then, even after being called on it in humiliating fashion, he repeats it yet again for a fourth time an hour later.

Will this hurt Rubio? If he’s smart, he’ll own it. He’ll make it the centerpiece of his campaign going forward, sort of like “Make America great again.” Unfortunately, now that Christie has pointed out Rubio’s index-card habit, everyone is going to be looking for it on every other subject too. Reporters will be combing through his debates and stump speeches looking for canned talking points, and then doing side-by-side comparisons as if he’s an author being accused of plagiarism.

We’ll see how this plays out. But it sure can’t be good news for ol’ Marcobot. He might need to think about getting an upgrade to his programming.