While Sanders frequently repeats and laments the statistic that one in five American children live in poverty, neither he nor Clinton has put forward a specific plan to address it. And neither spends much time talking about food stamps, housing subsidies, or the Earned Income Tax Credit, all essential programs for the poor.

Liberal pundits have criticized Clinton for defending her husband’s welfare legislation—and for parroting the conservative caricature of welfare beneficiaries as “deadbeats”—but so far, it hasn’t created any serious problems for her campaign. But this, perhaps, is to be expected from a more moderate Democrat. The oversight is arguably a more glaring problem for Sanders, who voted against the welfare bill and harshly condemned it in his 1997 book, but hasn’t made it an issue in the primary. In August, he told Bloomberg, with uncharacteristic restraint, “I think that history will suggest that that legislation has not worked terribly well.”

One reason for this restraint may be simple: perhaps Sanders believes that the best approach to poverty is to enact his broad economic revolution. Once that’s done, poverty will start to decrease.

But there’s another possible reason: maybe welfare reform has turned out not to be an especially big deal. After all, by 1996 the old AFDC program accounted for only about $20 billion in spending, a tiny fraction of the total welfare budget—and the difference in spending between AFDC and the TANF program that took its place is even more minuscule. The truth is that it’s barely noticeable compared to increases in social welfare spending during the 90s from changes to CHIP, EITC, the minimum wage, and so forth.

On that score, it’s worth taking a look at social welfare spending more broadly. But what’s the best way? We spend just shy of a trillion dollars a year on social welfare and safety net programs, but that number bounces up and down when the economy goes into recession and more people need help. That tells us more about the economic cycle than it does about anti-poverty programs. Instead, we need to look at spending per person in poverty. This gives us a better idea of how policy has responded to poverty over the past few decades. So here it is: 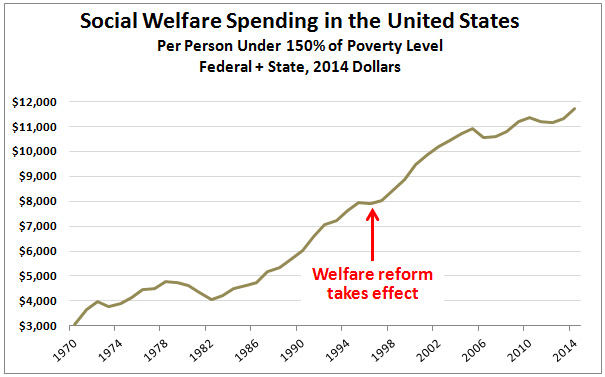 I chose 150 percent of the poverty level as my metric, but the truth is that it doesn’t matter much. This chart looks pretty much the same whether you show total spending, per capita spending, or spending per family below the poverty level. If you remove Medicaid from the mix, the spending increase isn’t as steep but otherwise looks little different.

There are two obvious takeaways from this. First, overall spending on social welfare programs has increased by 3x since 1980. That’s pretty substantial. Second, if the 1996 welfare reform act had any effect on this steady rise in spending, you’d need a chart the size of my house to make it out. Perhaps Bernie Sanders knows this, and understands that in the great scheme of things, welfare reform just isn’t worth fighting over anymore.