How is Flint doing these days? Here’s the most recent report from Michigan’s Department of Health and Human Services: 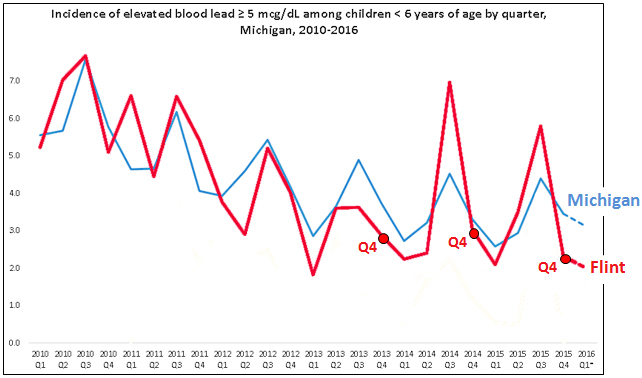 Blood lead levels tend to be seasonal, going up in the summer thanks to old lead in the soil getting kicked up during dry weather. As you can see, those summer peaks have been higher than normal since 2014 thanks to the ongoing contamination of Flint’s water supply. However, the 2015 summer peak was below the 2014 peak, and the Q4 level for 2015 is below the Q4 level for 2014. This suggests pretty strongly that Flint’s water pipes are returning to their pre-crisis state.

And how many houses still have lead concentrations above the EPA’s “action level” of 15 parts per billion? According to the residential testing report through Sunday, 786 out of 11,785 homes tested had levels above 15 ppb. That’s 6.7 percent. About 140 homes had levels above 100 ppb and 19 were above 1,000 ppb.

This is….sort of normal, actually. The number of homes with very high lead levels is unusual and needs to addressed immediately, but the overall number of 6.7 percent above the action level is well within the federal limit of 10 percent. Flint’s water appears to be in fairly good shape, and I wouldn’t be surprised if the 2016 summer spike is no higher than it was before 2014.

But nobody trusts the EPA or the Michigan DEQ, so probably none of this matters. If I lived in one of the 11,000 houses in Flint that tested below 15 ppb, I’d drink the water. But it’s hard to blame the residents for feeling otherwise.