A few years ago Jonathan Haidt wrote The Righteous Mind, an attempt to understand the way different people view morality. I won’t say that I bought his premise completely, but I did find it interesting and useful. In a nutshell, Haidt suggests that we all view morality through the lens of six different “foundations”—and the amount we value each foundation is crucial to understanding our political differences. Conservatives, for example, tend to view “proportionality”—an eye for an eye—as a key moral concern, while liberals 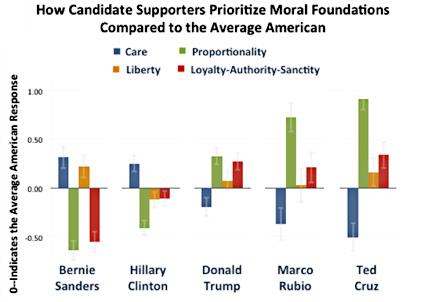 tend to view “care/harm”—showing kindness to other people—as a key moral attribute. You can read more about it here.

So which presidential candidates appeal to which kinds of people? Over at Vox, Haidt and Emily Ekins write about some recent research Ekins did on supporters of various presidential candidates. I’ve condensed and excerpted the results in the chart on the right. As you can see, Democrats tend to value care but not proportionality. Republicans are just the opposite. No surprise there. But were there any moral values that were unusually strong for different candidates even after controlling for ideology and demographics?

Yes. Sanders supporters scored extremely low on the authority axis while Trump supporters scored high on authority and low on the care axis. Outside of the usual finding for proportionality, that’s it. Hillary Clinton supporters, in particular, were entirely middle-of-the-road: “Moral Foundations do not significantly predict a vote for Hillary Clinton; demographic variables seem to be all you need to predict her support (being female, nonwhite, and higher-income are all good predictors).”

So there you have it. Generally speaking, if you value proportionality but not care, you’re a Republican. If you value care but not proportionality, you’re a Democrat. Beyond that, if your world view values authority—even compared to others who are similar to you—you’re probably attracted to Donald Trump. If you’re unusually resistant to authority, you’re probably attracted to Bernie Sanders. The authors summarize the presidential race this way:

….On the Republican side…despite Trump’s longevity in the polls, authoritarianism is clearly not the only dynamic going on in the Republican race. In fact, the greatest differences by far in the simple foundation scores are on proportionality. Cruz and Rubio draw the extreme proportionalists — the Republicans who think it’s important to “let unsuccessful people fail and suffer the consequences,” as one of our questions put it.

….One surprise in our data was that Trump supporters were not extreme on any of the foundations. This means that Trump supporters are more centrist than is commonly realized; consequently, Trump’s prospects in the general election may be better than many pundits have thought. Cruz meanwhile, with a further-right moral profile, may have more difficulty attracting centrist Democrats and independents than would Trump.

So which moral foundations define you? If you’re curious, click here and take the test.