A federal judge ruled Tuesday that top aides to Democratic presidential front-runner Hillary Clinton should be questioned under oath about her use of a private email server as secretary of state, raising new political 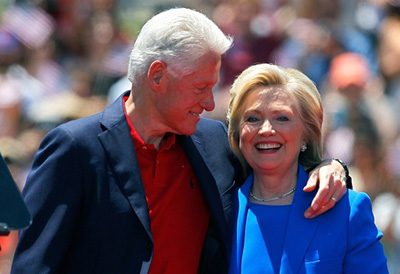 and legal complications for Clinton as she tries to maintain momentum for her campaign.

….The judge said that months of piecemeal revelations to date about Clinton and the State Department’s handling of the email controversy created “at least a ‘reasonable suspicion’ ” that public access to official government records under the federal Freedom of Information Act was undermined. “There has been a constant drip, drip, drip of declarations. When does it stop?” said Sullivan, a 1994 Bill Clinton appointee who has overseen several politically sensitive FOIA cases. “This case is about the public’s right to know,” he said.

This is all courtesy of Judicial Watch, the Scaife-funded outfit that brought us so much endless Clinton paranoia in the 90s. To this day, most people—including an awful lot of reporters who ought to know better—still don’t realize just how deliberate and manufactured the effort to destroy Bill Clinton was back then. Despite thousands of hours and millions of dollars of investigation, virtually none of the “scandals” turned out to be real. They were just an extended effort to throw mud at the wall and see if something stuck. Ironically, the only one that did stick had nothing to do with any of the mud. It was just an old-fashioned sex scandal.

And now we’re back where we started. Hillary obviously blew it when she set up her own email server, but once again, thousands of hours of investigation have turned up nothing. It was dumb, but there’s no scandal, no national security threat, and no cabal of silence. Hillary Clinton has been required to make her entire email record public, something that’s never happened before to a secretary of state, and still there’s nothing. She’s undergone hours of House questioning, and still nothing. But the mud keeps coming. Maybe Huma Abedin will finally provide the smoking gun! Maybe if we demand to see her personal emails! Maybe if we recover bits and pieces from the server! There just has to be something there.

There isn’t. Hillary didn’t order the assassination of Vince Foster and she didn’t set up a personal email account so she could conceal her orders to stand down the rescue effort in Benghazi. But thanks to the obsessive Clinton hatred of Judicial Watch and the assistance of credulous judges like Emmet Sullivan, the “drip drip drip” will keep on coming. We never learn.