Marc Edwards, the Virginia Tech scientist who uncovered the lead poisoning in Flint, is absolutely brutal about the way funding priorities have corrupted academic science:

We’re all on this hedonistic treadmill — pursuing funding, pursuing fame, pursuing h-index — and the idea of science as a public good is being lost. This is something that I’m upset about deeply. I’ve kind of dedicated my career to 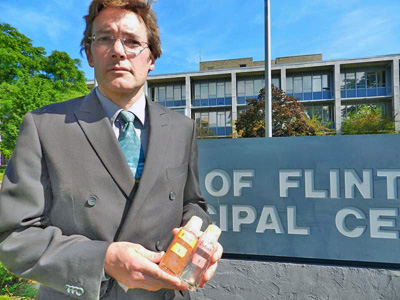 try to raise awareness about this. I’m losing a lot of friends.

….Q. Do you have any sense that perverse incentive structures prevented scientists from exposing the problem in Flint sooner?

A. Yes, I do. In Flint the agencies paid to protect these people weren’t solving the problem. They were the problem….I don’t blame anyone, because I know the culture of academia. You are your funding network as a professor. You can destroy that network that took you 25 years to build with one word. I’ve done it.

….Q. Now that your hypothesis has been vindicated, and the government has its tail between its legs, a lot of researchers are interested.

A. And I hope that they’re interested for the right reasons. But there’s now money — a lot of money — on the table….The expectation is that there’s tens if not hundreds of millions of dollars that are going to be made available by these agencies….I hate to sound cynical about it. I know these folks have good intentions. But it doesn’t change the fact that, Where were we as academics for all this time before it became financially in our interest to help? Where were we?

….Q. When is it appropriate for academics to be skeptical of an official narrative when that narrative is coming from scientific authorities? Surely the answer can’t be “all of the time.”

I grew up worshiping at the altar of science, and in my wildest dreams I never thought scientists would behave this way….Science should be about pursuing the truth and helping people. If you’re doing it for any other reason, you really ought to question your motives.

Unfortunately, in general, academic research and scientists in this country are no longer deserving of the public trust. We’re not.

In academia these day—and especially in the hard sciences, which are expensive to support—funding is everything. To a large extent, at big research universities faculty members basically work on commission: they have to bring in enough money to pay their own salaries and bankroll their own labs. And when was the last time a salesman on commission badmouthed his own product?