Can someone help me out? Flint reconnected to the Detroit water system in October, and it was supposed to take a few weeks after that to clean out the pipes. 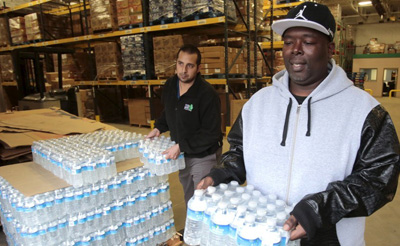 So what happened? I keep seeing pallets of bottled water being delivered to Flint, but shouldn’t the tap water be safe by now? Has it been tested for lead levels in the past month or two? I’ve been trying to check this out, but I can’t seem to find anything definitive.

I feel like I must have missed something. I don’t know how hard a thorough round of testing is, but it sure seems like that would have been a top priority starting in early November. Is it being done?

Back in December, the Flint Utilities Director announced that they planned to boost the level of phosphates in the water to aid in rebuilding the scale. They also hired a firm to begin testing of high-risk homes. Normally it can take up to five years for scale to rebuild, but presumably the additional phosphates will reduce this time. Still, it might be quite a while before the water is safe again, which explains the continuing pallets of bottled water.