Here’s a cheeful headline over at Wonkblog:

Dying of Cancer in the U.S. Is Not as Bad as Most People Think

Huh. I’ll bet many people beg to differ. Luckily, someone thought better of this claim and changed the headline:

The U.S. is not as bad at end-of-life care as most people think

That’s more like it. But is it true? Ezekiel Emanuel1 is part of a team that’s done some comparative research on this subject,2 and he says it is. But when I read carefully through the Wonkblog piece, here are the takeaways:

Oddly enough, this article bothers me not for any personal reasons, but because it’s the second time in the last few months that I’ve seen a disturbing phenomenon: reporting of scientific papers that passes along the author’s spin uncritically. We saw this recently with the Case/Deaton paper, which was widely reported as showing a specifically middle-aged problem even though that’s not what the paper demonstrated. But Case and Deaton spun it that way, so that’s what showed up everywhere. This time it’s a paper that shows only a bit of modestly good news on the end-of-life 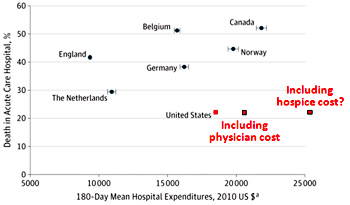 front, but it’s getting reported as a mythbusting finding because that’s how one of the authors is spinning it.

In this case, there’s another piece of badly misleading data: that the US spends about as much on end-of-life care as other countries. But the study includes only hospital costs, which are obviously lower in the US if we hospitalize less than other countries. What’s more, the study also omits physician costs in the US. If that were included, and if hospice costs were included, US spending would look a lot higher. You can sort of figure this out if you read the paper, but the chart that’s helpfully included makes no mention of it.

Moral of the story: as usual, be careful reporting about studies. Read the fine print. Don’t take the authors’ interpretation as gospel.

2The seven countries he compared were the United States, Germany, Norway, Belgium, Great Britain, Canada, and the Netherlands.