Oh FFS. We just demoted Pluto because it was too small and didn’t do a real planet’s job of taking out the orbital trash, but now the boffins at Caltech are claiming we have a ninth planet after all. It’s a gazillion miles away, but apparently it’s big enough to “clear the neighborhood” and 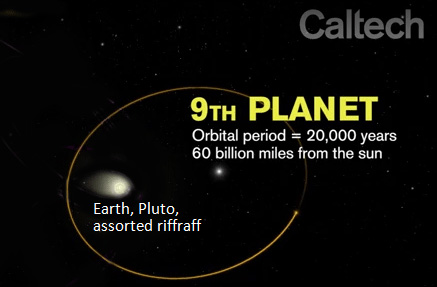 thus qualify as a real planet.

If it’s real, that is. So far its existence has merely been inferred from gravitational anomalies in Kuiper Belt objects:

The object, which the researchers have nicknamed Planet Nine [ed note: clever!], has a mass about 10 times that of Earth and orbits about 20 times farther from the sun on average than does Neptune….”This would be a real ninth planet,” says [Mike] Brown, the Richard and Barbara Rosenberg Professor of Planetary Astronomy….Brown notes that the putative ninth planet—at 5,000 times the mass of Pluto—is sufficiently large that there should be no debate about whether it is a true planet….In fact, it dominates a region larger than any of the other known planets—a fact that Brown says makes it “the most planet-y of the planets in the whole solar system.“

Ooh. The “most planet-y” object in the solar system! And how do they infer its existence? With sciencey stuff like this:

Well, I’ll believe it when I see it. Or, rather, when I see a digitally enhanced CCD image that’s been fed into the maw of a supercomputer, thus allowing scientists to assure me at a 5-sigma level that a certain gray pixel has met rigorous statistical tests and really is Planet Nine. After all, seeing is believing.

By the way, if we ever mount an expedition to Planet Nine, it should be pretty interesting. Here’s what I expect we’ll find: 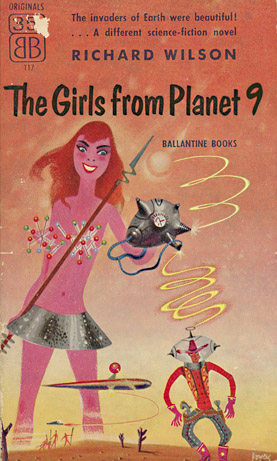