Back in the day—meaning approximately 2008 or so—Republican presidential candidates made a big mistake. They released their tax plans without bothering to figure out anything other than the average tax cut each one provided. The frequent result was that taxes went up on the poorest people and down on the richest. That’s bad optics.

By 2012 they’d all wised up. Their tax cuts might be bigger for the rich, but they made sure everyone got a cut.

When I was looking at Ben Carson’s plan last night, I realized that the poor guy hadn’t been paying attention. He figured that by setting a zero percent tax rate on income up to $36,000, he’d be guaranteeing that the poor would get a tax cut. Unfortunately, his actual knowledge of the tax code is so shallow that he didn’t realize what he meant when he said his plan eliminated all credits 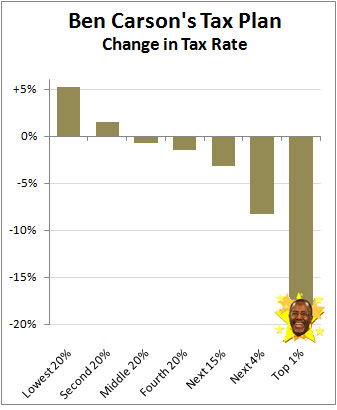 and deductions. That means he’s getting rid of the Earned Income Tax Credit, which often amounts to a negative tax rate for the poor. In other words, paying $0 is a tax increase for a lot of them. Citizens for Tax Justice provides the details:

There’s still no reason to care about this since Carson is obviously doomed to return to the book promotion racket at this point. Still, just for the record, I figure this deserves a chart to memorialize it for posterity. So here it is.