I may have missed most of the debate, but I did manage to catch the pre-debate festivities. What a horror show. Everybody knew exactly what Donald Trump wanted, and they gave it to him anyway. I flipped over to CNN and Brianna Keilar was interviewing Trump in his plane and letting him walk all over her. She throws him a softball about Fox so that Trump has an opportunity to announce that “someone” at Fox called to apologize to him. She asks him about his past support for abortion and he baldly changes the subject, basically daring Keilar to try to get an answer out of him—so she shrugs and moves on. I switch to MSNBC and they’re split-screening with the Trump event. Switch back to CNN 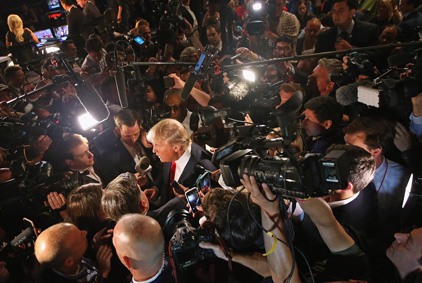 and now they’re split-screening too. Switch to Fox and the very first question of the debate is, “Senator Cruz, do you have any zingers about Donald Trump you’d like to share with us?”

Curtis Houck informs us that the network evening news shows spent 10 minutes on the Trump boycott and less than two minutes on the actual debate. ABC News tells us that Trump was mentioned 11 times in the first 30 minutes of the debate. For the past two days Trump’s boycott has been practically all anyone could talk about.

I know, I know: he’s the frontrunner, we have to cover him, yada yada yada. But there’s something pathological going on here. It’s as if the press corps is a bunch of eight-year-olds tugging on daddy’s arm begging for his approval. Trump refuses to answer any of their questions, but they don’t press him because he might get mad and stop talking to them. He lies to their faces and they just move on. He puts on an obviously fake “veterans” event designed to show that he’s the alpha chimp, and everyone rushes to cover it.

What the hell is going on? Seriously. What does everyone find so damn fascinating about the guy?