In the New York Times today, Judith Shulevitz makes an argument in favor of a Universal Basic Income. She puckishly frames this as “reparations” for the work that stay-at-home mothers do without compensation—work necessary to keep the human race going and which the rest of us free-ride on. But if that’s the case, why propose a UBI for everyone, even men and childless women? Here’s the answer:

Politically, the U.B.I. looks a lot more plausible than a subsidy aimed only at mothers, because, as Social Security and Medicare make clear, policies have more staying power when perceived as general entitlements rather than free cash for free riders.

Hmmm. Politically I’d say it’s a nonstarter no matter how it’s framed. But Shulevitz’s essay prompts me to write about something that’s been in the back of my mind for a while. She is, of course, echoing a sentiment so widespread on the left that it has its own catch phrase: “programs for the poor are poor programs.” As Shulevitz says, the idea here is that means-tested benefits are unpopular and constantly under 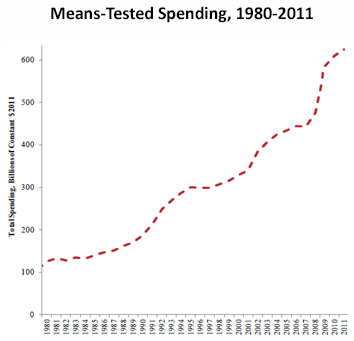 But is this really true? I think it fails on two counts. First, although means-tested benefits (EITC, food stamps, Medicaid, etc.) are, indeed, often under attack from conservatives, they’ve nevertheless increased rather smartly over the past few decades. The chart on the right, from Brookings, shows the growth of means-tested benefits since 1980. It comes from Ron Haskins, a conservative, but it pretty closely matches a more recent analysis from the CBO. Adjusted for inflation, means-tested benefits over the past 30 years have increased steadily; have never decreased; and even before the Great Recession were more than 4x higher than in 1980. And this chart accounts only for the ten biggest federal programs. If you add in the rest, and then include state and local programs, total spending is about 50 percent higher.

So in terms of spending, it doesn’t really seem to be the case that means-tested programs are disastrous for either participants or for the liberal project more generally. The public may or may not be thrilled about safety-net programs, but one way or another they seem to tolerate assistance to the poor pretty well.

Second—well, we don’t really need a second way the familiar aphorism fails, do we? If means-tested programs do, in fact, have plenty of staying power, then there’s no need to support a UBI if your real intent is to pay stay-at-home parents. We should just pay the stay-at-home parents. But here’s the second point anyway: just as it’s not really true that spending on the poor is precarious, it’s not clear that universal programs are all that beloved. The two usual examples of this are Social Security and Medicare, which share three characteristics:

I’d argue that the first is irrelevant. It’s #2 and #3 that make these programs beloved and politically untouchable.1 Is there a way to test this? Is there a universal benefit that’s not aimed at the elderly and not perceived as paid for? Not really. There are tax credits that fall into this category, like the mortgage interest deduction, but I can’t think of any actual cash payouts that do. The closest, I suppose, is unemployment insurance, which is semi-universal. But is it beloved? Is it politically invulnerable? Based on events of the past few years, I’d say it’s at least as vulnerable as other safety net programs. Maybe more so.

Bottom line: it’s time to retire the ancient shibboleth about programs for the poor being poor programs. It doesn’t really seem to be the case. That doesn’t mean there aren’t plenty of good arguments for a UBI. There are. I don’t really buy them at the moment, but I probably will in the future when the robots take over.2 In the meantime, if you say something like this:

The feminist argument for a U.B.I. is that it’s a way to reimburse mothers and other caregivers for the heavy lifting they now do free of charge. Roughly one-fifth of Americans have children 18 or under. Many also attend to ill or elderly relatives. They perform these labors out of love or a sense of duty, but still, at some point during the diaper-changing or bedpan cleaning, they have to wonder why their efforts aren’t seen as “work.” They may even ask why they have to pay for the privilege of doing it, by cutting back on their hours or quitting jobs to stay home.

….Society [is] getting a free ride on women’s unrewarded contributions to the perpetuation of the human race….I say it’s time for something like reparations.

Then you just need to make the case for reparations. Proposing a UBI instead won’t do any good and will just make the price tag higher.

1Though it’s worth noting that for all their alleged untouchability, Republicans sure do spend a lot of time trying to suggest ways to pare them down.