There’s a new paper out about the minimum wage. Jeffrey Clemens of UC San Diego estimates that minimum wage increases during the Great Recession decreased employment by 5.6 percentage points among workers age 16-30 without a high school diploma. Tyler Cowen comments:

I hope this receives the media attention it deserves. Will it?

Here’s the problem: as near as I can tell, the world is awash in minimum wage studies. With no disrespect intended toward Clemens—whose conclusions sound reasonable—a single study just isn’t that meaningful these days.

Because of this, I don’t usually spend much time highlighting specific new minimum wage studies. A few months ago I broke this rule to write about a paper estimating the employment shock from the Mariel boat lift, and not much later I ended up writing a second post that basically dismantled 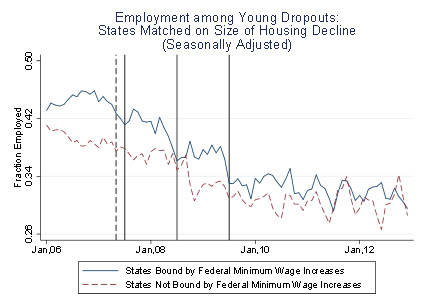 the paper. If I’d waited, I would have ignored the whole thing. There’s just too much statistical detail in these papers for a layman to gauge their reliability.

For what it’s worth, I’d note a couple of things about Clemens’ paper. First, Clemens compares employment across states, not counties. Those are pretty big units for comparison, so a bit of caution about the results would be sensible. Second—as with the Mariel boat lift paper—this is pretty much a destruction test. If minimum wage increases don’t have an effect on employment even during a massive recession, then we might as well just bump up the minimum wage to $15 right now and not worry about it. In this case, Clemens studied the most vulnerable possible population during the biggest recession in a century, and still came up with only 5.6 percentage points. That’s not nothing, but it’s not huge either.

I won’t be surprised if Clemens turns out to be right. It certainly seems like minimum wage increases during a sharp recession should have a disemployment effect. At the same time, it’s not clear what the policy implications of this are. We never know when a recession is going to hit, so avoiding disemployment during recessions would mean never increasing the minimum wage.

In any case, I can’t really judge the fairly involved math that Clemens uses to extract a signal from the employment noise, so for the moment I have no opinion about this paper. Eventually a bunch of other people will weigh in, and a bunch of other studies will be done. Once all that is done, maybe we can draw some conclusions.